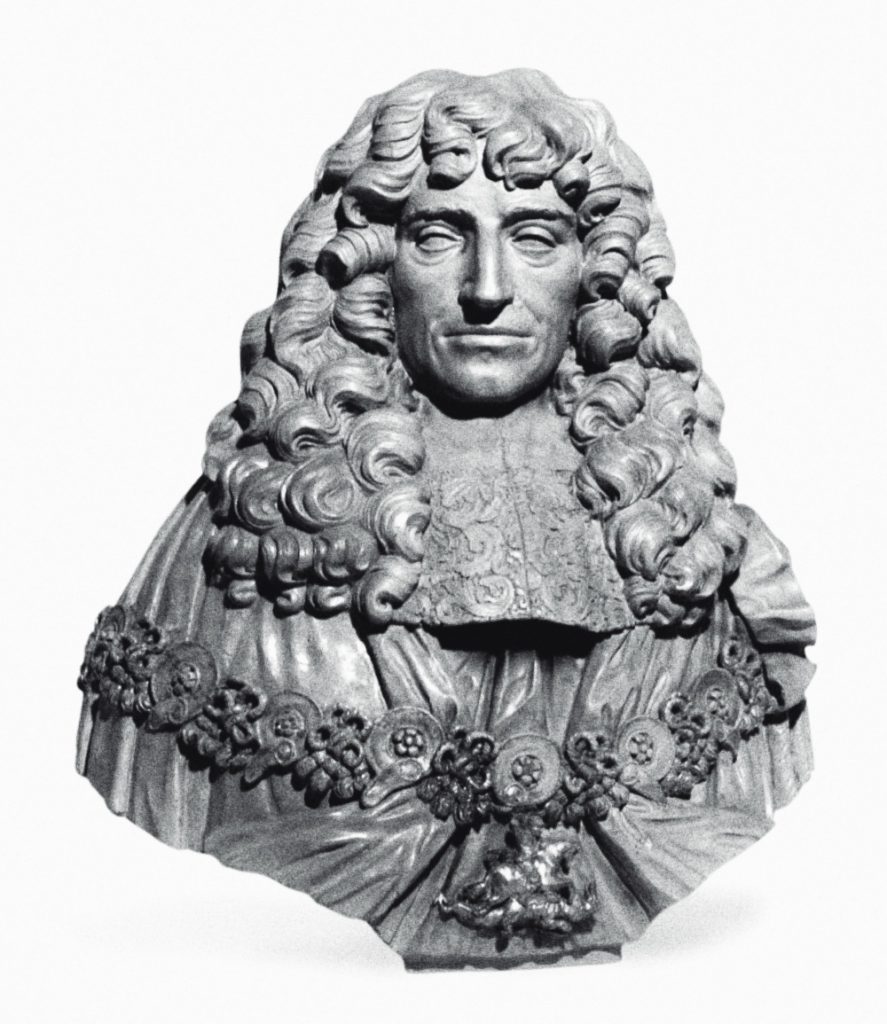 Prince Rupert of the Rhine, by John Dwight of Fulham, c. 1678

Made from a golden toned oak, it has elaborate sterling silver mounts of 17th century design. Inside, it has been lined with a tin/lead foil, a method used in tea caddies to ensure fresh tea.

See this remarkable box here, in our stock >>

This is of course an anomaly; tea caddies do not appear like this in the 17th century. A casket for precious items or documents would be possible, but tea caddies were not yet invented in the 17th century: tea was stored in metal or glass. The ‘tea caddy’ this piece appears to be would be early 18th century at best, but it is also a bit too small compared to others.
The answer to this problem lies in the various documents that came with the box. The original hand-written note explains all:

So who was this Price Rupert of the Rhine? And what exactly was his ‘house’?

The mid 17th century was a time of great turmoil for England, and the English Civil War of 1642-51 involved the struggle for England between those supporting the Monarchy (the ‘Royalists’ or ‘Cavaliers’) and those against (the ‘Parliamentarians’ or ‘Roundheads’). Prince Rupert (1619-82) was a Royalist commander. In his day, and to those generations who remembered the Civil War afterwards, he became something of a celebrity, a dashing ‘Cavalier’.

As his name suggests, he was originally from present day Germany – where his father was Frederick V of the Palatine. His mother was Elizabeth, eldest child of James I – so his English connections were strong, where he had the title Duke of Cumberland. He had been a soldier from 14 in Europe, and when called on by the Royalists in England, rose to the occasion. He became a favorite of James I, rising to the most senior post of command.
In 1643, the Roundheads overran Liverpool, and based themselves in the castle. All across the town they dug a series of trenches three meters deep….. and waited. Prince Rupert arrived in early 1644, and promptly brought in his cannon: and so the bombardment began. (18 days later, and less 1500 casualties, he finally took town & castle back for the Royalists).
In order to coordinate the siege, he commandeered a house with a decent view over the town, on Everton Brow. It is this house that is described as the source of the wood for this box – a decent medieval merchant’s house rather than a ‘cottage’, having a stone two-story frontage with a large bay window – no doubt of great use as a viewpoint as Prince Rupert planned his attack.

An article in the Illustrated London News, 17 May 1845 illustrates the building, along with its history, noting it had just been demolished as ‘… the modern improvements in the locality …. rendered its removal a matter of necessity, not of taste’ .

This 1845 date of demolition is very interesting; at this time, ‘Antiquarian’ interest in things such as the Civil War and great people like Nelson and Prince Rupert led to a thriving trade in ‘relics’ made from parts of buildings – or in the case of Nelson, his flagship the ‘Victory’. These were often useful items, such as letter openers and snuff boxes. The tea caddy we are examining fits this scenario perfectly, and so we can attribute it to a very clever ‘curio’ creator of the early Victorian period, circa 1845. While the before mentioned relics were made in quantity, the bespoke nature of this piece – and the apparent re-use of original 17th century silver mounts – suggests this is a unique creation.

The other three documents that came with the casket add to the story; Alstons & Hallam goldsmiths & silversmiths, described it as ‘Antique’ and by John Wakelyn – no doubt going by the maker’s marks on the silver mounts, reading ‘IW’ – but this cannot be accurate, as John Wakelyn only registers a similar mark in the 1770’s.
This card was probably written close to the date on the other card, 1938 – when ‘Mother’, being Mrs W. G. Hamilton, of Highgate, London, gave it to her child – assumably a son – ‘with love from your father & mother, Christmas 1938’.
(‘Hamilton’ is of course an old local Western District surname, local to us in Geelong where this piece was found, and so a likely reason for this piece appearing in Australia).

What a fascinating character Prince Rupert was! The British Museum states that he was “….highly intellectual with artistic and scientific interests; played an important role in the development of mezzotint as well as experimenting with gunpowder, metallurgy, gunnery, glass manufacture etc.”

He is a very familiar face for anyone who has studied the history of early English ceramics: he was a celebrity in the days of the fabulous John Dwight of Fulham and his sophisticated pottery works. He produced a massive almost life-size bust of the Prince in around 1680, in high-fired stoneware – an extraordinary feat that now resides in the British Museum.

Also the British Museum, there is a magnificent bracket clock that was apparently designed by him, and dozens of his engravings and lithographic prints. I’ve put a few in the gallery below. These are fascinating, showing his strong interest in the arts. A box such as this one is a fine tribute to him indeed!