The firm of Dihl et Guérhard was initially established in 1781, under the patronage of the duc d’Angoulême – even though he was only 5 at the time!  This Royal Patronage was essential, as the Royal Decree of 1766 had given the monopoly of Gold & Colour decoration to porcelain to the Royal factory of Sèvres.  However, any concerns with Royal Patrons were exempt from the restriction.   When the Ancien Regime was swept away in the Revolution a decade later, the firm engaged with the new wealth of the French Republic, producing a superb quality range of luxurious porcelain that rivalled the State-owned Sèvres factory.

Christophe Dihl was a German ceramics expert, and Antoine Guérhard was his French partner with the money. His wife Louise-Françoise-Madeleine was the brains who kept things running. When her husband died in 1793, she ran it alongside Dihl, and 4 years later they were married. She went on to out-live him, and the factory; it found it hard to survive in the age after Napoleon, and went out of business in 1828. Dihl died 1830, Louise in 1831.

Below: Large French bisque porcelain group, depicting Astraeus (Dusk) with the Anemoi (his children, the four winds),  attributed to Dihl et Guérhard, circa 1790 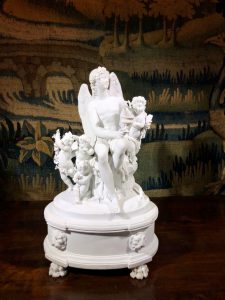