Cantonese is an ethnic group associated with the southern provinces of China, including the historical European-influenced colonies of Hong Kong and Macau.
While originating in Canton/Guangzhou, they were best known for their dispersal around South-East Asia, often as merchants in places like Hong Kong.  They brought their distinct culture with them, including porcelain, enamels, and textiles, and this material culture is know as ‘Cantonese’.

As merchants, Cantonese traders were ready to interact with the Westerners who came looking for luxury goods from China. These interactions took place at specified trading ports, and Canton/Guangzhou was a major one – and so, the goods that came out of the port were known as ‘Cantonese’.

Ceramics were a major commodity, and were ordered from the main kilns of China such as those in Jingdezhen. ‘Cantonese Ceramics’ are therefore another type of ‘Chinese Export’. As there is a lot of the pink enamels, we could call it a type of ‘Famillie Rose’, a development of the style of Chinese porcelain popular in Europe in the 18th century.

American retailers and collectors use the term ‘Rose Medallion’ to describe the most common pattern found, which features a distinct peony flower in a roundel, often with a bird.

Dating is somewhat a problem, as it was made over a long period – beginning in the mid 19th century and going into the late 20th century.

A good idea of age can be inferred by the delicacy of the work; the later the piece, the ‘looser’ the painting. The gold also changes in the early 20th century to a bright harsh gold. 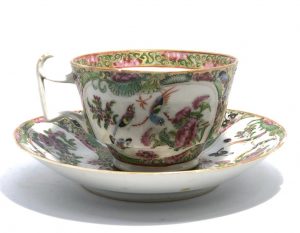 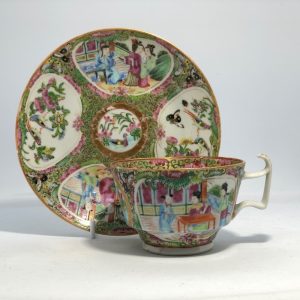 A dated piece in the Rosenberg Collection, Geelong, is a good indication of the earlier style, with a crest hidden beneath. This is the crest of the Mackintosh clan, with a rearing cat and the motto ‘PRENEY GARDE’ – and the date 1869. 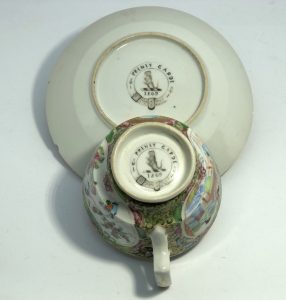 (as it is unlikely for a family crest to be placed where it isn’t seen, this crest must surely be a case of ‘lost in translation’, where an order from Scotland for a service with the Mackintosh crest was sent through, with a sample of the crest – being in a roundel, perfect for substituting for the usual peony in a roundel. Imagine their surprise when the recieved their service a few years later – with the crest beneath the piece instead!) 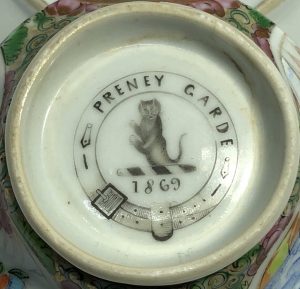 For a plate from this ‘mistaken’ order, see Christies 2009 sale of the Hodroff Collection