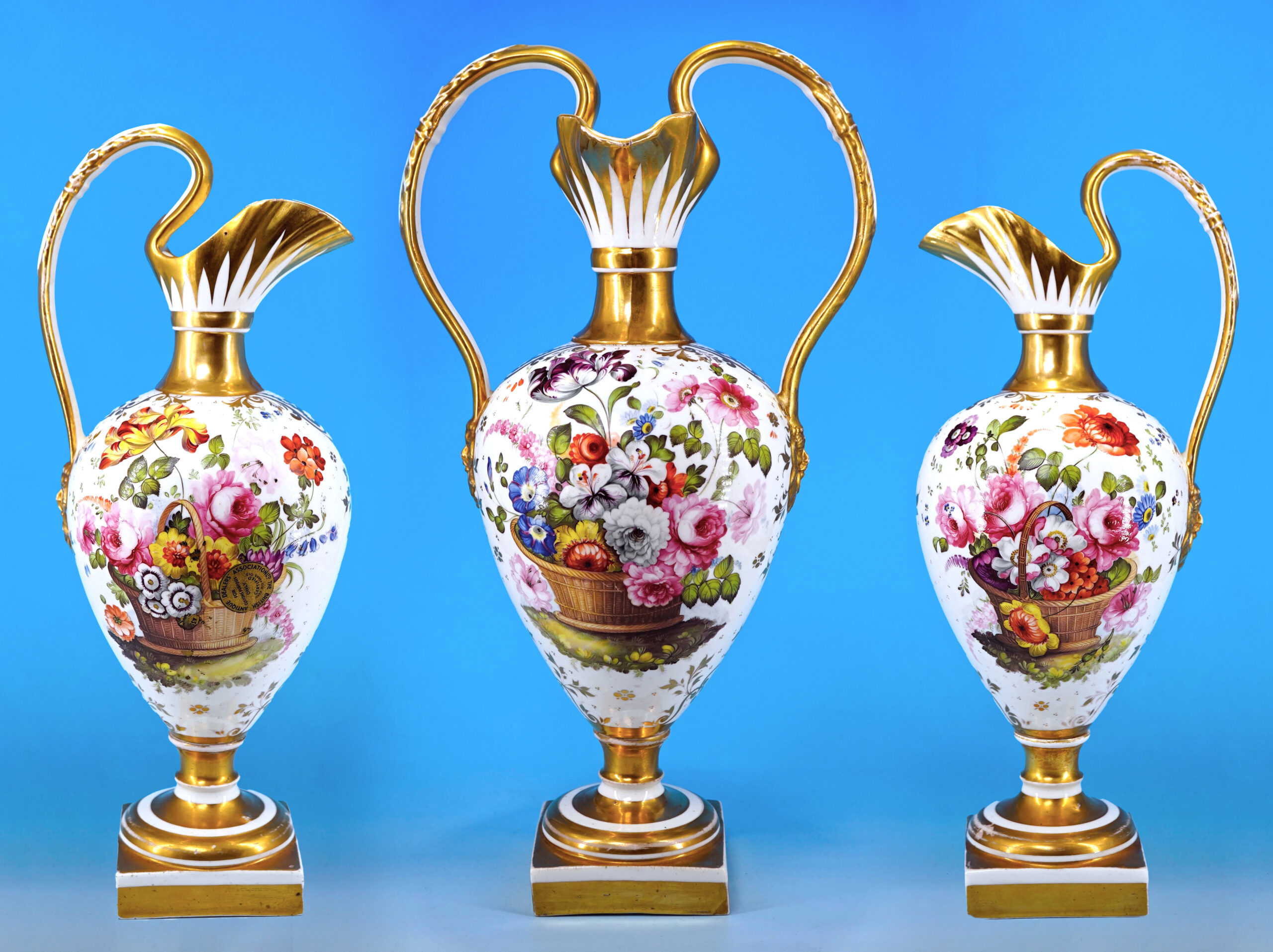 Coalport, or perhaps Swansea
Circa 1820

ref. Godden- Minton- pl.111 for Minton examples, p56 for the early Minton pattern book listing reprinted.
This shape appears in the early Minton pattern book, which was compiled around 1835 but include the designs made from 1824 onwards. However, the Minton ewers are small; our ewers are vastly larger, and have a multitude of details which differ to the Minton examples.

The mask terminals at the base of each handle are one unique aspect of these ewers, as it is a far more expressive ‘goatman’ than the usual English versions. The small details of the flutes along the top, and the moulding to the handles are also unseen in the examples by other known makers.

Daniel also created similar vases, but once again his designs differed. Nance included some examples of Minton/Daniel in his ‘Swansea’ book, attributed to Swansea by mistake.

However, both Minton and Daniel, as well as a host of other makers, freely copied Swansea (and Nantgarw) shapes once they had disappeared from the fine porcelain retail scene in the early 1820’s. The question is, what were they copying?

A thorough examination of these ewers reveals many characteristics in common with marked Swansea pieces. In particular, the Swansea paste known as ‘duck egg’ is a good harmony, and transmitted light gives a glow of blue/green translucency in all parts of the body. This colour is the perfect match to comparable pieces in the Rosenberg Reference Library in Geelong, while both Minton and Daniel porcelain doesn’t show this tone in any pieces tested. Coalport, however, can be this colour.

Our speculation is these are Swansea products, perhaps London decorated, and were quite limited in production, hence being ‘unrecorded’. The decoration has a lot in common with the London workshops of the 1820’s, who were always eager to secure Swansea blanks to decorate when they could. Perhaps these were ‘trial’ pieces that were never mass-produced, and sold when the factory stores were cleaned out after they closed.

Another aspect to consider is the tail-end of William Billingsley’s career – after quietly disappearing from the Nantgarw works in Wales in 1820, he is on record at Coalport shortly after. While none of the marked Coalport products of this period show use of the soft-paste Welsh body (making more stable bone china instead), there is the possibility it has simply not yet been recognized. Mystery pieces like

A single ewer with the same decoration was on the British market in the earlier 2000’s.