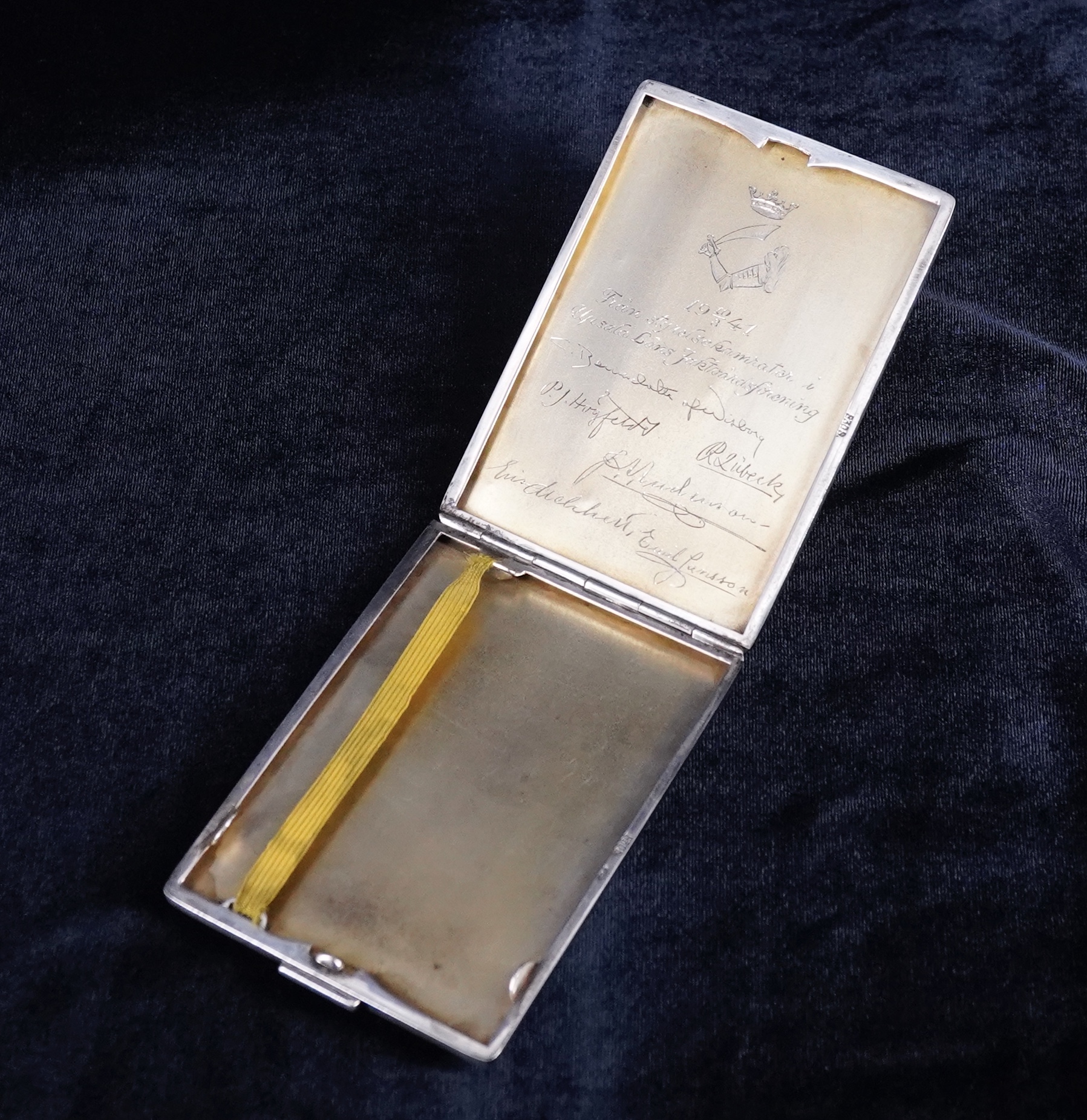 Us Rosenbergs always joked about having Scandinavian Royal blood – my Grandfather came from Sweden, and in the heart of Copenhagen there’s ‘Rosenborg Castle’, full of wonderful treasures such as the Crown Jewels and lots of Meissen porcelain. On visiting a few years ago, my father John enquired if family members got free entry; no humour was detected in reply!
Perhaps the closest we will get was found in Geelong recently, a small silver case of Swedish silver, with a series of Swedish inscriptions that pinpoint it to the Swedish royal family!

The engraved clues begin with a 5-pointed coronet crown, an arm with sword beneath, then the date 10/8/1941, with an the inscription beneath the arms reading “fran syrelse kamrater i Usala lans Jaktvardsforening” – roughly ‘From the Comrades of the Upsala Hunting Guard Association’.

The title ‘Count of Wisborg’ is an interesting one. Wisborg (or Visborg) is a town on Gotland, off the coast of Sweden. In 1892 , Prince Oscar of Sweden, Duke of Gotland and second in line to the Swedish throne, married against the wishes of the King – a shocking thing in the European Royal Circles of the period. He lost his claim to the throne, and all other titles – but was given the title ‘Count of Wisborg’, created just for him by his uncle Adolfe, Grand Duke of Luxembourg. Since this first awarding, it has been awarded three other times, all to the male-line descendants of Princes of Sweden who had married without permission from the King.

Prince Oscar’s marriage in 1888 caused shock in the Royal family, and a document was drawn up to ensure the remaining 3 princes didn’t follow suite – the comment was the King had lost one son and didn’t want to ‘lose’ any more…. this had the opposite effect on the population, who were quite taken by the prince who gave up everything for love. He actually headed over to England to be married, and tied the knot in a church in Bournemouth!

His wife Ebba was of noble birth – and had been a Lady-in-waiting to the Crown Princess, Victoria – but was just not titled enough to marry the second-in-line to the throne. Fortunately, Oscar had the full support of his mother, and on their wedding day, with his mother present, they were given the title of ‘Prince and Princess Bernadotte’. This comes down through the subsequent generations as their family name. Four years later, in the court of Luxembourg, they received the title ‘Count and Countess of Wisborg’.

They lived a quiet life in Stockholm, away from the court, taking great interest in improving the lot of the poor. Both were religious and involved in numerous charity organisations. Oscar had served in the Navy, attaining the rank of Vice Admiral – achieving a voyage around the world and several trips to America. Later, he was involved in the YMCA of Sweden, and chaired the ‘Friends of Mission to the Laps’ for several years. They had five children, and enjoyed holidaying in summer on the island of Gotland: this was also the place their ‘countship’ originated, Wisby being the name of a ruined fortress nearby. Here, they stayed at ‘Villa Fridhem’, an interesting swiss-style building erected in 1860-61 for Princess Eugenie. She left it to Oscar in 1889, and in 1927 he gave it to the YMCA.

Back to our silver box; the inscription states it was dedicated in Upsala – which we take as being present day Uppsala, not far north of Stockholm. What the Upsala Hunting Guard Association was, I could not find out – or what they were hunting – but he was a military man, and this was in the middle of World War Two.

Sweden in 1941 was of course neutral; they had built up their own military as they nervously eyed-off both Russia and Germany heading towards war in the Baltic, and when hostilities inevitably broke out, managed to keep both at arms length. August 1941 was a particularly concerning time, as Germany had just invaded Russia with great success – using iron ore purchased from Sweden to build up their military – and in turn causing the union of the ‘Allies’ of England, USA and Russia, in the fight against Germany. Sweden allowed German troop trains through their country on their way to the front with Russia in Finland. Fast-forward a few years and Sweden was allowing the Allies to send troops and supplies through their territory to beat Germany into submission; ‘neutrality’ with careful concessions got them through the war.

Somewhere in the middle of this, the 82-year old Prince Bernadotte, Count of Wisborg, had an event in Upsala, along with 5 companions; as a souvenir, they had silver cases with everyone’s signatures carefully inscribed on them. As the Count’s is the first on the list, could we say this was his?

The inscriptions are beautifully done, no doubt from a calling-card bearing the originals. The skill of the engraver is very evident, and brings to mind the ease at which this person could have forged such signatures. This opens up a world of possibilities, when we consider the other aspect of Sweden’s neutrality; Spycraft! As the neutral territory between Germany and Allied countries, all sorts of interactions took place via Sweden – leading to a need for forged ‘official’ documents, useful in crossing borders. An engraver of skill such as the person who did these signatures would have been well placed and in demand…

I wonder who this interesting piece of Swedish silver was presented to… and how did it make its way to Australia? perhaps like Grandpa Rosenberg, it came with the influx of people looking for a new life in this new land of promise…