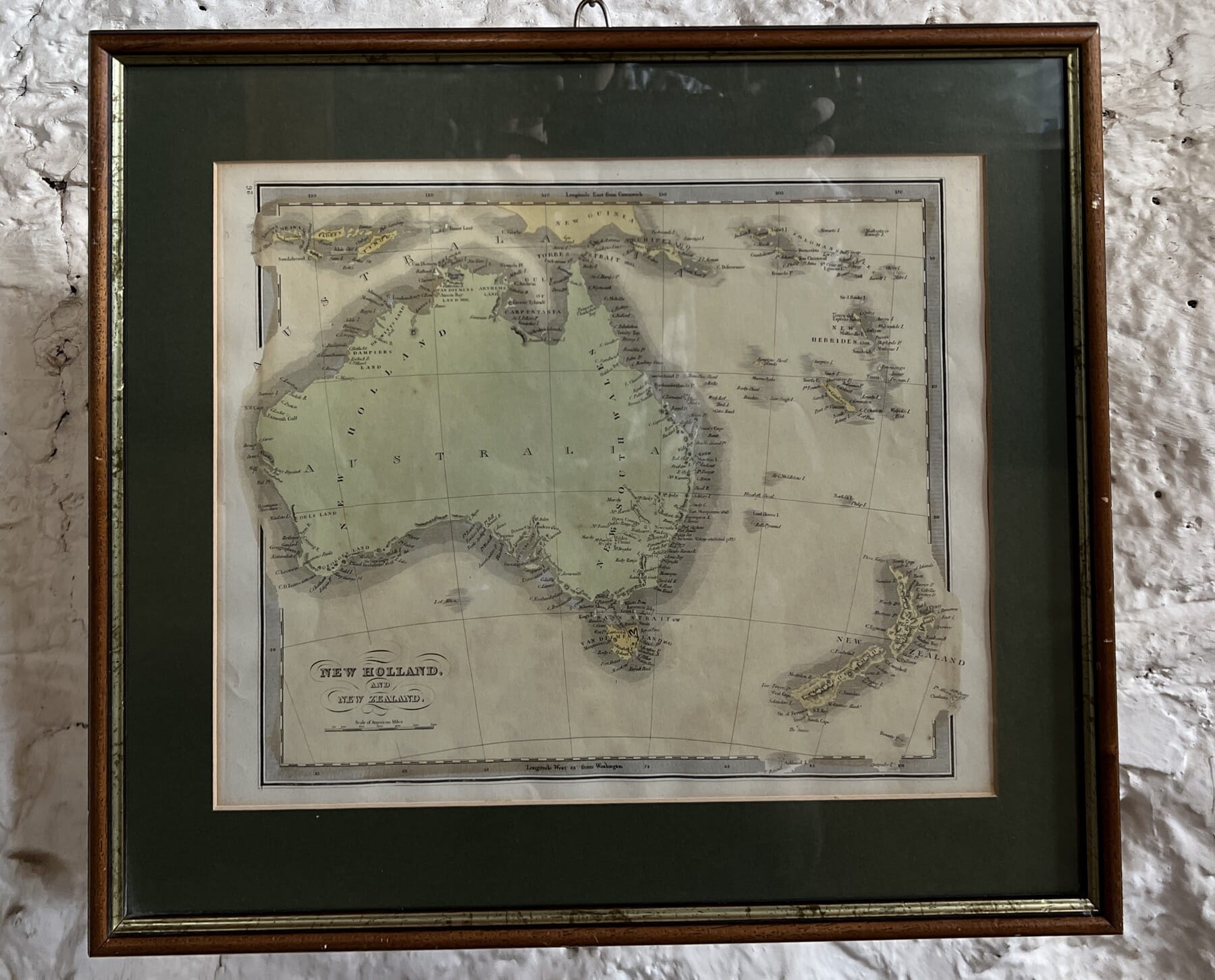 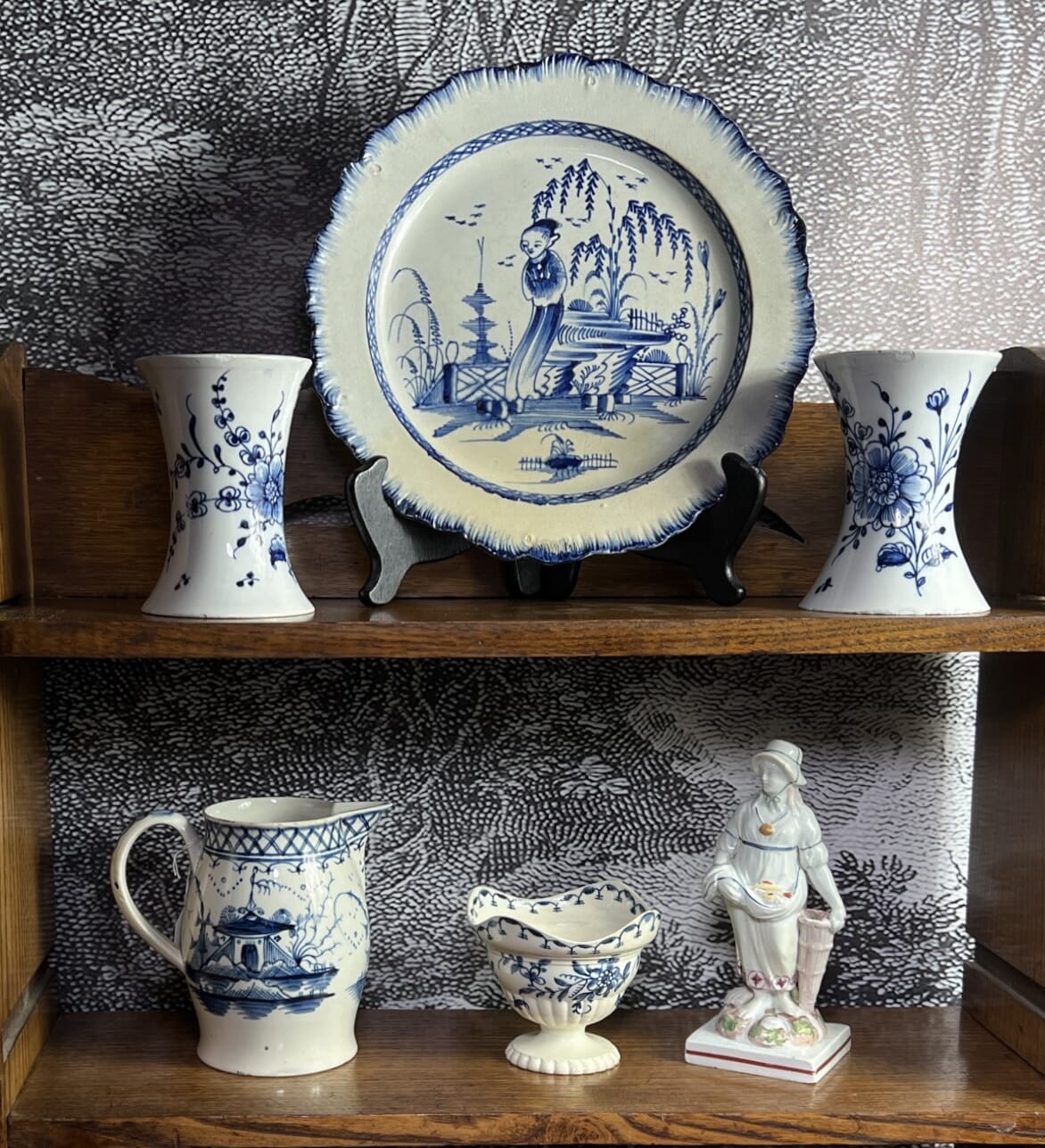 Welcome to another ‘Fresh Stock’ release from Moorabool.

There’s a large number of pieces being posted onto Moorabool.com, with some super rare pieces appearing in these last weeks of 2022. 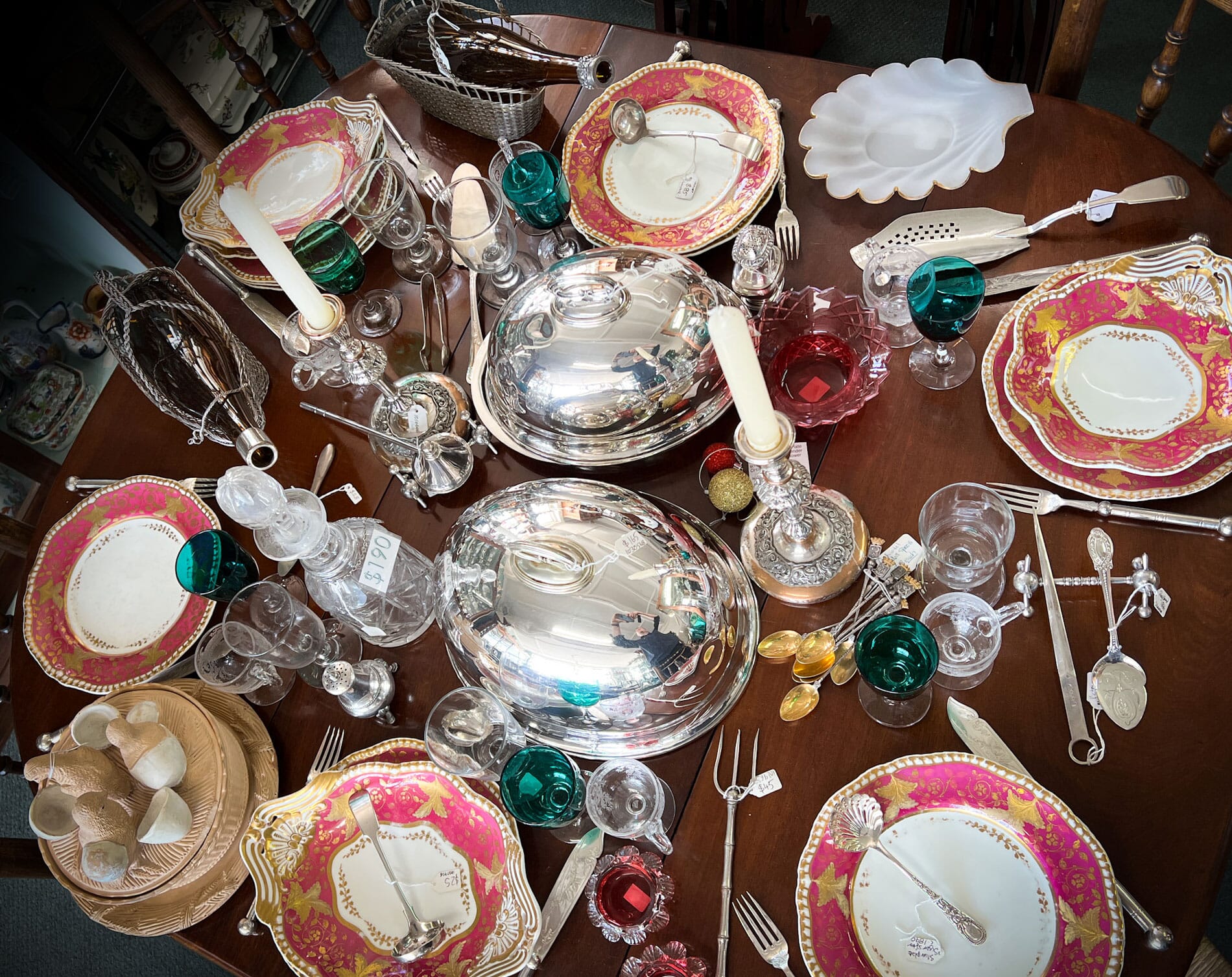 With Christmas approaching fast, Moorabool is ready to help with Presents. On this website, you’ll find over 10,000 interesting items to consider….

We have been providing one-off gifts for over 60 years!

…to a set of 4 hard-to-find Champagne Flutes, hand-cut quality ‘crystal’ from around 1900, with a spare!

These life-size depictions of fruit are botanical illustrations from a 1851 American publication. They are Lithographs – etched onto stone as a method of printing – and hand-coloured to accurately depict the apple and pear varieties. They are all a little browned & faded, and their gilt frames are overpainted in white – but they certainly have a terrific impact!
And the price…. irresistible!

If you know your Gift Recipient likes our stock, but are unsure of what to choose…. let them choose.
We offer Gift Vouchers in $100 and $200 amounts.

Simply use the button below to purchase at any time. We will then email you the voucher for you to pass on or print.
Custom amounts are also possible, email us for details. 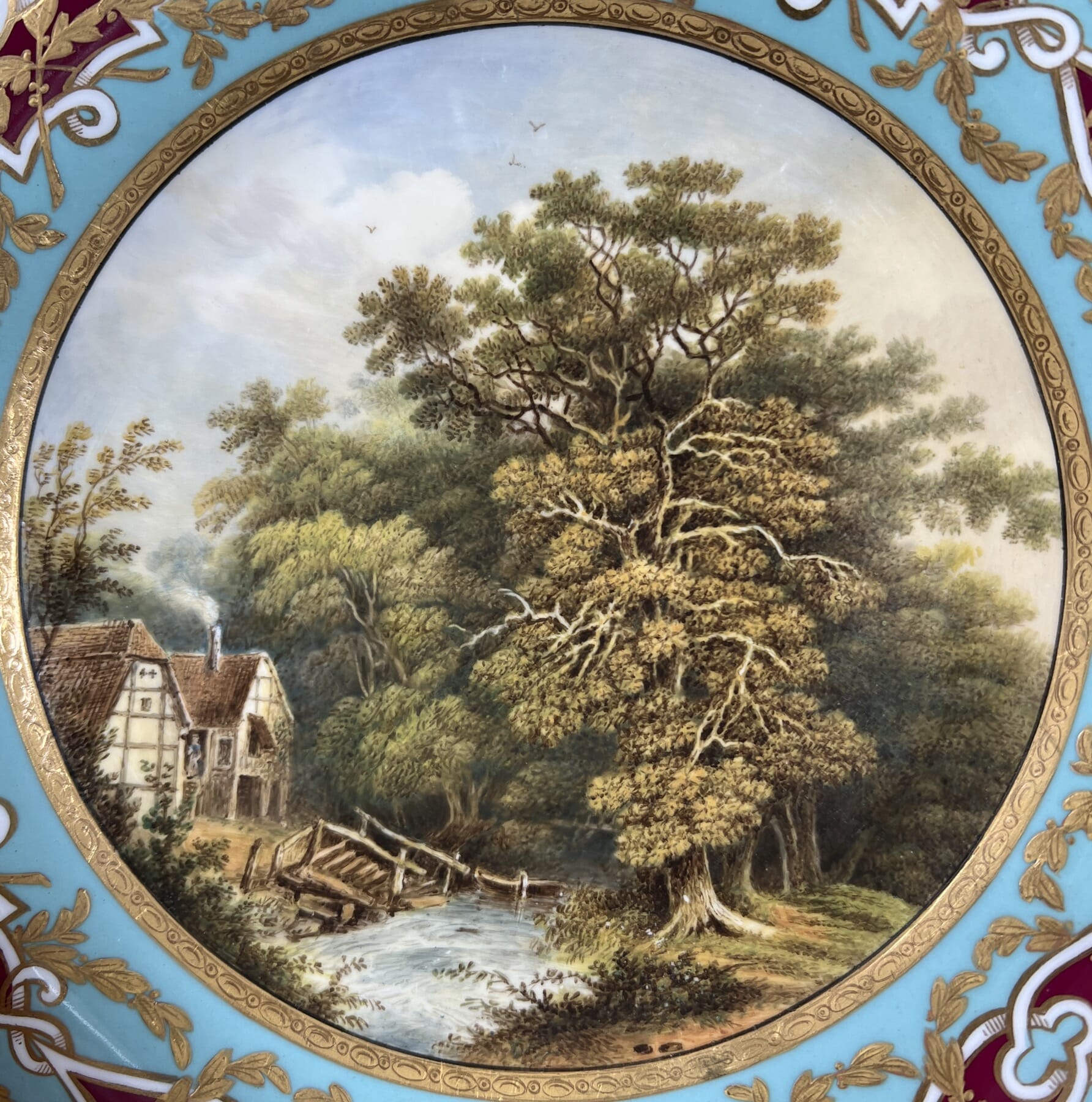 With Christmas fast approaching we have some great gift ideas for everyone.

Looking for something ‘Unique’? We can provide that!

Antiques and fossils make great gift for the person who has everything. Today’s Fresh Stock has a terrific range to consider. All the ancient pieces & fossils come with a Certificate of Authenticity & Description explaining what they are. 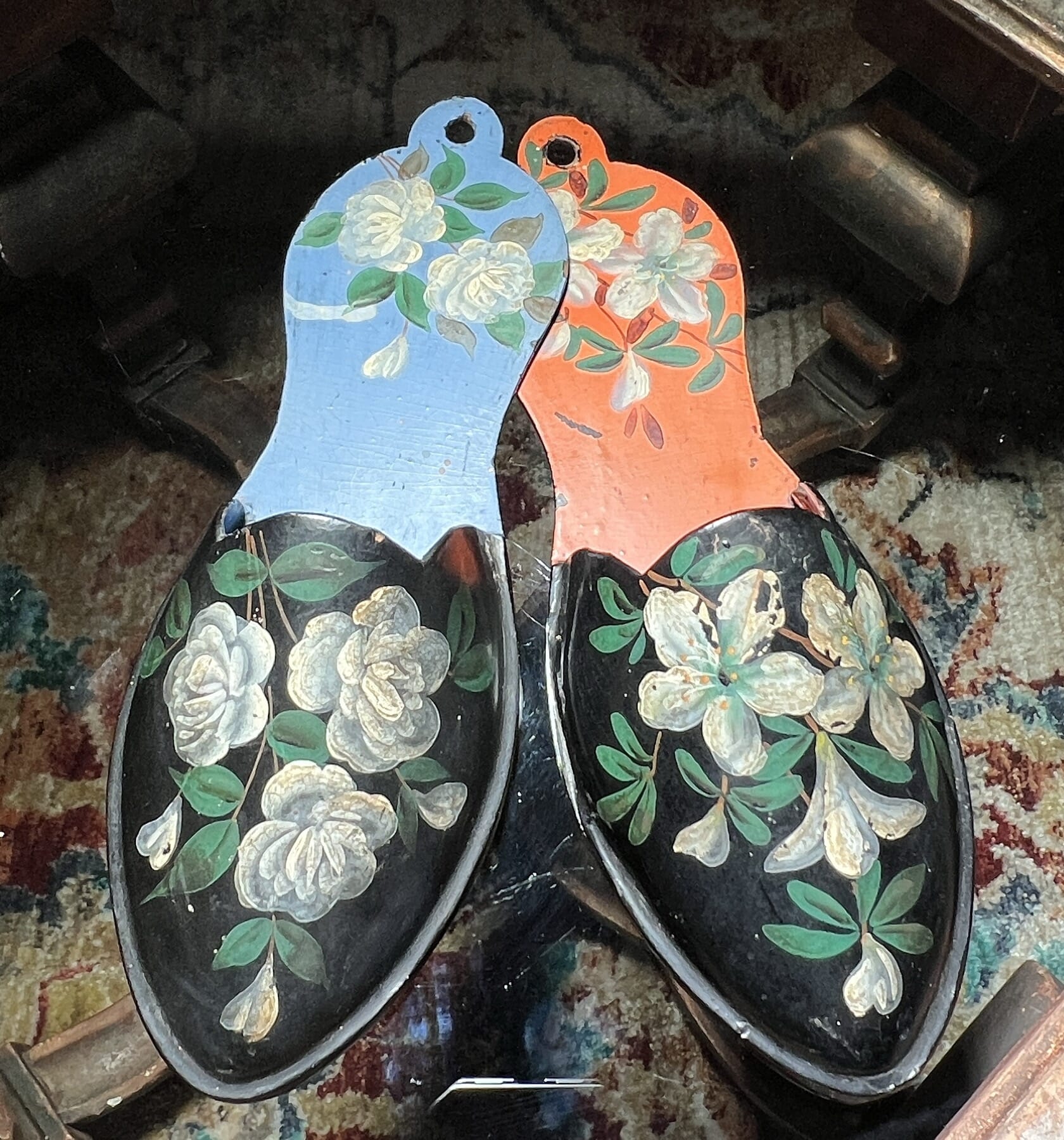 There’s an influx of interesting Fresh pieces to browse, released today.
We’ll have a lot more going on over the next few weeks, so keep an eye on our ’Latest’ gallery. 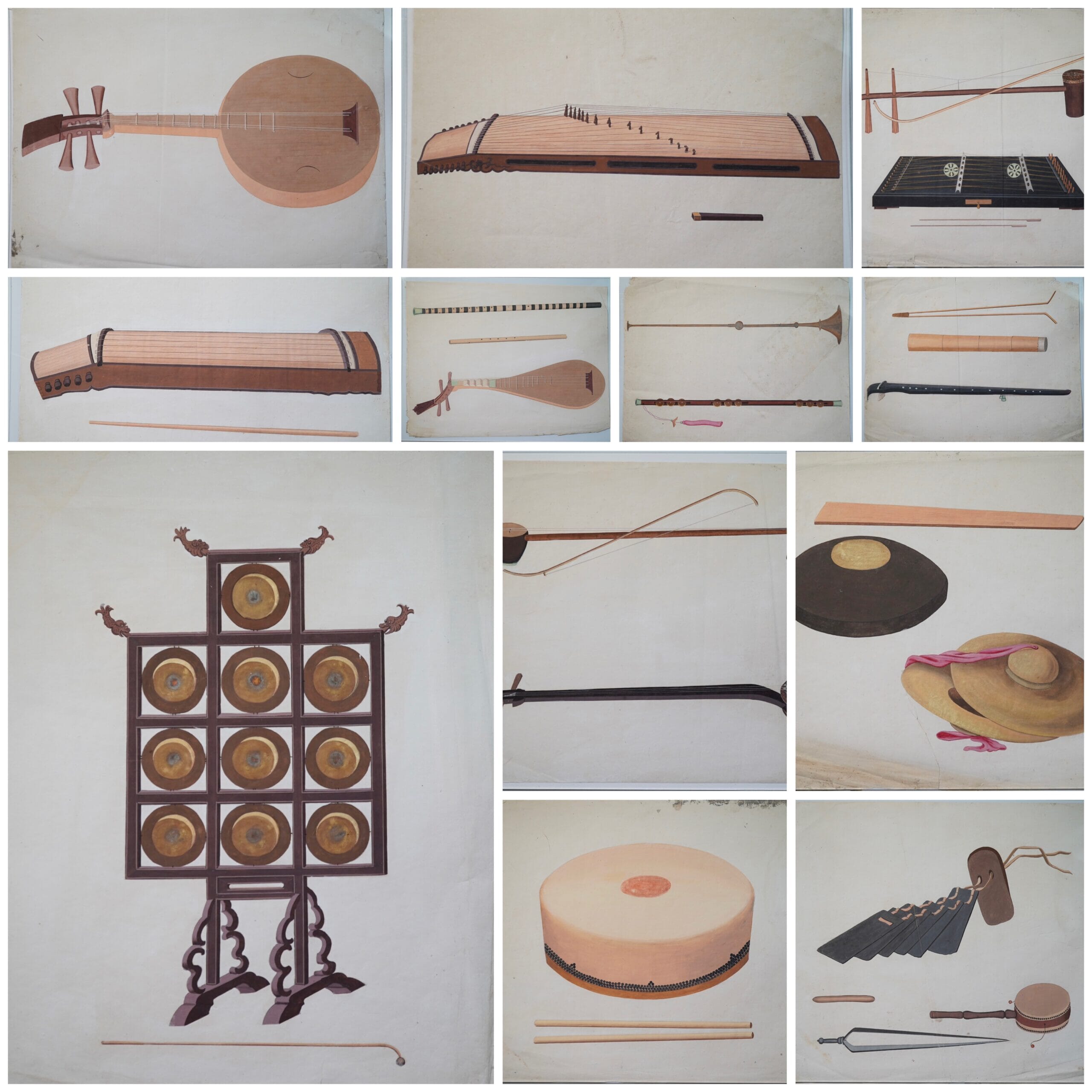 A remarkable folio of 200 year-old Chinese paintings recently came to Moorabool. They are large-scale examples of the ‘China Trade’ paintings, usually seen on a smaller scale on ‘Pith-paper’. These are on a thicker paper, using Mulberry bark as the basis, hence known as ‘Mulberry Paper’.
They were popular with the European traders who came to Canton to buy Tea, Silk, Porcelain, and exotic Eastern produce. Rare early examples can be the mid-18th century, but they became very popular by around 1800 as trade flourished.
Their subject matter reflects this intention as a ‘souvenir album’ – the distant ancestors of the postcard folio of the modern tourist.

One theme was ‘The Story of Tea’, showing the process it went through from the bush to the tea chest- appropriate considering the intended customer, visiting European merchants. Another rarer series follows the manufacture of Porcelain.

By far the most popular subjects were the everyday people that visitors would have seen on the streets – the umbrella mender, the fish sellers, the hat maker. Crime & punishment folios featured many macabre details not suitable for children… Others have children playing with toys, the dress of the wealthy & court, and the bright & lively processions for various holidays and celebrations.

A third group served as a ‘Visual Encyclopaedia’ – with subjects such as flower specimens, birds & fish specimens, ship types, and even ’Antiques’. This album we are showing here belongs to this group, a Musical Instrument ‘visual guide’.

Occasionally there are small-scale pith paintings of Chinese musicians playing the various instruments –
but it seems these depictions of instruments on this album are quite rare.
No comparable example could be found.

They represent a large number of Chinese musical instruments, as were used in the early 19th century when they were painted. As a folio, they were a document of the types of Chinese traditional instruments, which brings to mind it’s purpose: to the Westerners who were often the clients for the China-Trade paintings, they were curios; to the Chinese, they would be a fine reference folio for the musically minded – a tutor to a prince, perhaps?

A total of 20 instruments are depicted, some single, several double, and two triple.

These works are for sale individually, or talk to us if you are interested in the complete group, or part thereof. Individual prices – $750 each, all 11 total price $7,000 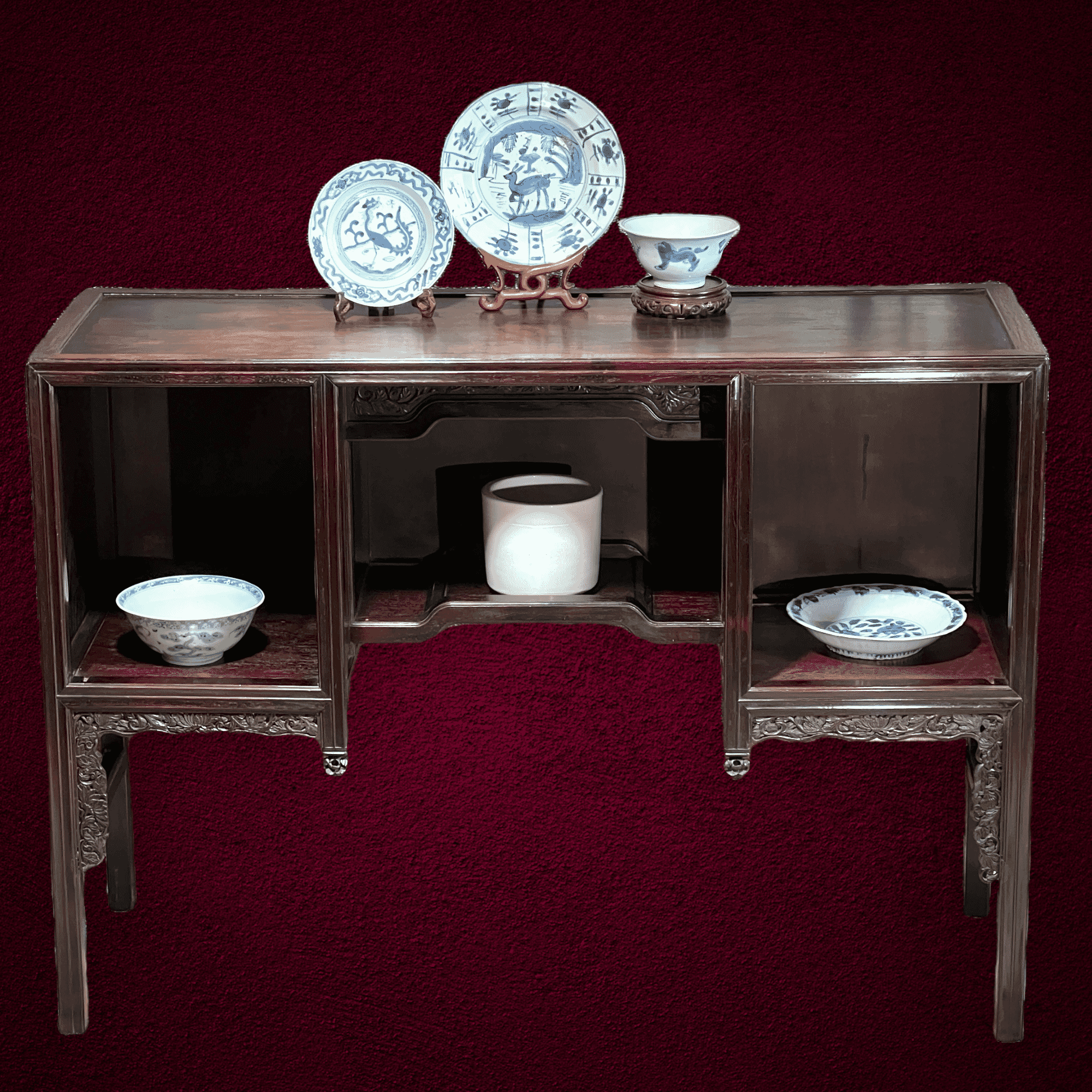 Welcome to our 2022 Special Gallery of Fresh Chinese items.

We’ve always stocked a good selection of Chinese items, and at present, we have a large number of items to share.

Of particular note below are the Ming Dynasty blue & white pieces. Part of a collection we are selling, the highlight is perhaps the Jiajing period dish, 500 years old and complete with a mark. This 4-character mark misses the important part – the name of the Emperor during the period it was made – but is also found on a very similar example in the British Museum. They have linked it to an example that has the complete mark, revealing it to be made in the time of Emperor Jiajing, who reigned 1522-66.


We have some quality Chinese Hardwood furniture to offer. A pair of cabinets make excellent display cases for any collector of Asian Antiques, and are available as a single or the pair. The long low table has handy compartments beneath, and is an excellent shallow size for small spaces, such as a hallway.

Below are some lovely examples of the Tang & Ming dynasty pottery models. These items were buried as offerings, to ensure the deceased had a life of luxury in the afterlife. They are accurate models of everyday items, and allow us to vividly imagine everyday life in their time: in this respect, they indeed meet their purpose by bringing the past to life!

Monotone Chinese ceramics are beautiful in their simplicity, relying on the colour and form rather than decoration.

Blue and White porcelains have been the most popular Chinese Ceramics in Europe since the Ming Dynasty, and the same aesthetic is still popular today. The following examples are all Ming, dating from 500-

Vast amounts of Chinese Porcelain was made purely as Export Wares in China, with England, Europe, and America as the main destination. The shapes reflect this, as they are usually European rather than traditional Chinese.

Works on paper – or ‘pith’, the thinly-shaved core of a fast-growing tropical plant – are beautiful, rare survivors. The larger pieces are on linen, and were intended as ‘scrolls’, to be brought out and displayed when needed. The large example with the multi-figures is a family tree, an ‘Ancestor Scroll’ set in the interior of their house.

Looking for more Chinese Art & Antiques? We have a large number of quality Chinese pieces entering stock – see them all together in this gallery.

More being catalogued to add, drop back for more! 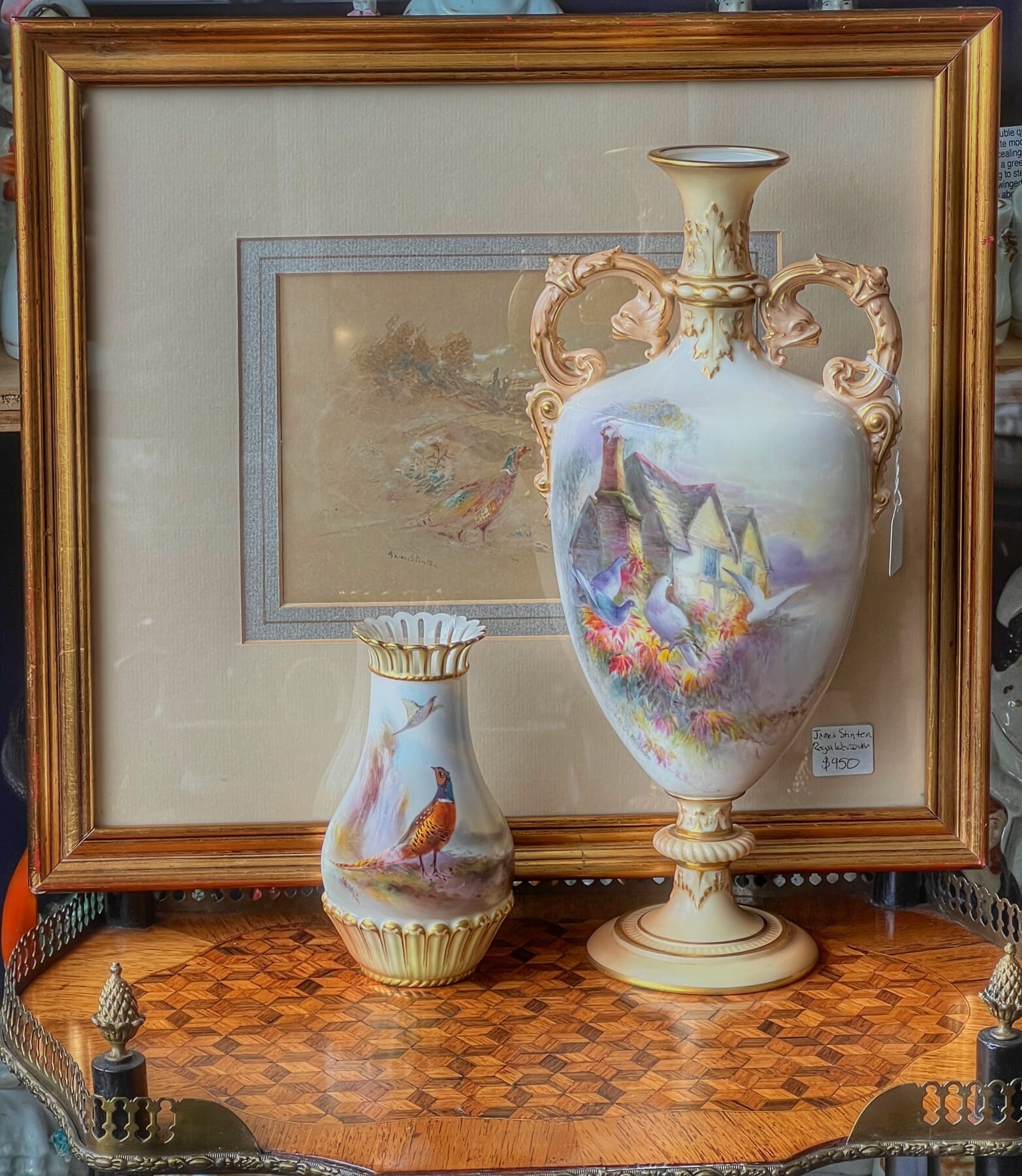 Fresh to stock are two pieces of Royal Worcester, beautifully hand-painted, one by James Stinton with pheasants, the other with doves & a cottage by Charles Baldwyn.

James Stinton was son of well known Worcester artist John, and his brother John junior, all of who painted birds. James came to work at the Royal Worcester factory when Grainger Worcester was taken over in 1902, making this a very early example of his work at Royal Worcester.
James also painted watercolours of this same subject. These ‘studies’ were probably a side-line for him, but would have also been a great way to keep his skills sharp.

The large Charles Baldwyn vase is an unusual example. It dates to 1903 – the last year he worked at the factory, before leaving to become a watercolour artist. He had spent his time at Worcester, and made a name for himself painting birds: as an avid bird watcher, he was able to turn this hobby into an art with great success. A search for his Worcester painting will reveal a large number of ‘flights of swans’ – his most popular design – and the occasional own or blue bird. Our example is doves, and while there are a few of these, their background is most unusual – a classic English Country Cottage. It’s a rare, large example of this talented artist, one of the last he would have done before leaving the Royal Worcester works. 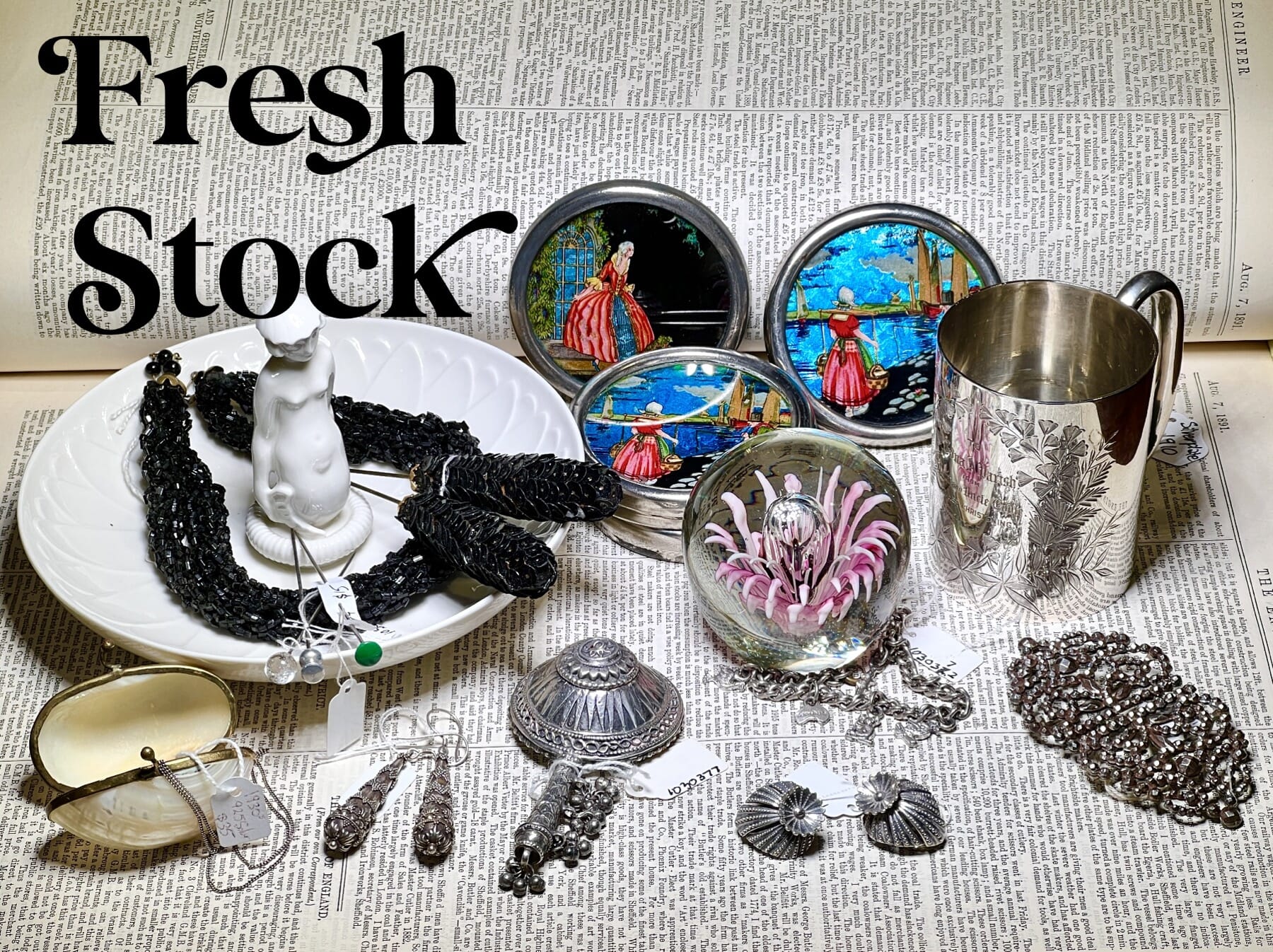 An interesting selection of items, just freshly released.
With Christmas coming up fast, there’s a lot of items that would make great small presents – check out the ‘Under $100‘ and ‘Under $50‘ galleries.

We’re used to Dutch Delft in the blue & white, but the mineral manganese was also used to produce these interesting variations to the usual ‘Delft’. The Biblical examples are scarce, and these are fine examples – note the ‘Moses in the Bullrushes’ scene complete with a Sphinx in the background!

Once essential items for anyone who wrote, a pen-knife was a small sharp blade that allowed you to trim a quill to write with. The rarities in this collection are the ‘mini’ examples- perfectly usable , but in miniature and designed to hang from the fob chain of a gent’s pocketwatch.
The ‘fancy’ examples with silver blades are in fact for use with foods – ie. cutting soft fruits, where steel would both be damaged by the acids of the fruit, and cause discolouration to the fruit. Silver on the other hand didn’t have the same reaction, and they were a popular item in the Victorian era.
There’s also a rather lethal looking medical tool: a lancet, perhaps the most ancient and simple of all medical instruments: it has a super sharp double-sided blade with slender point, and was used to open a vein and allow all the badness to drain from the body… alongside the inevitable blood. Thankfully, a practice long since abandoned thanks to modern medicine! This is a German example in Tortoiseshell, marked ‘THAMM’ for a Berlin maker of surgical instruments.

For all of those who are local, here’s a selection of interesting Artworks & Artifacts of local interest – all from Geelong, the Bellarine, and nearby country areas. 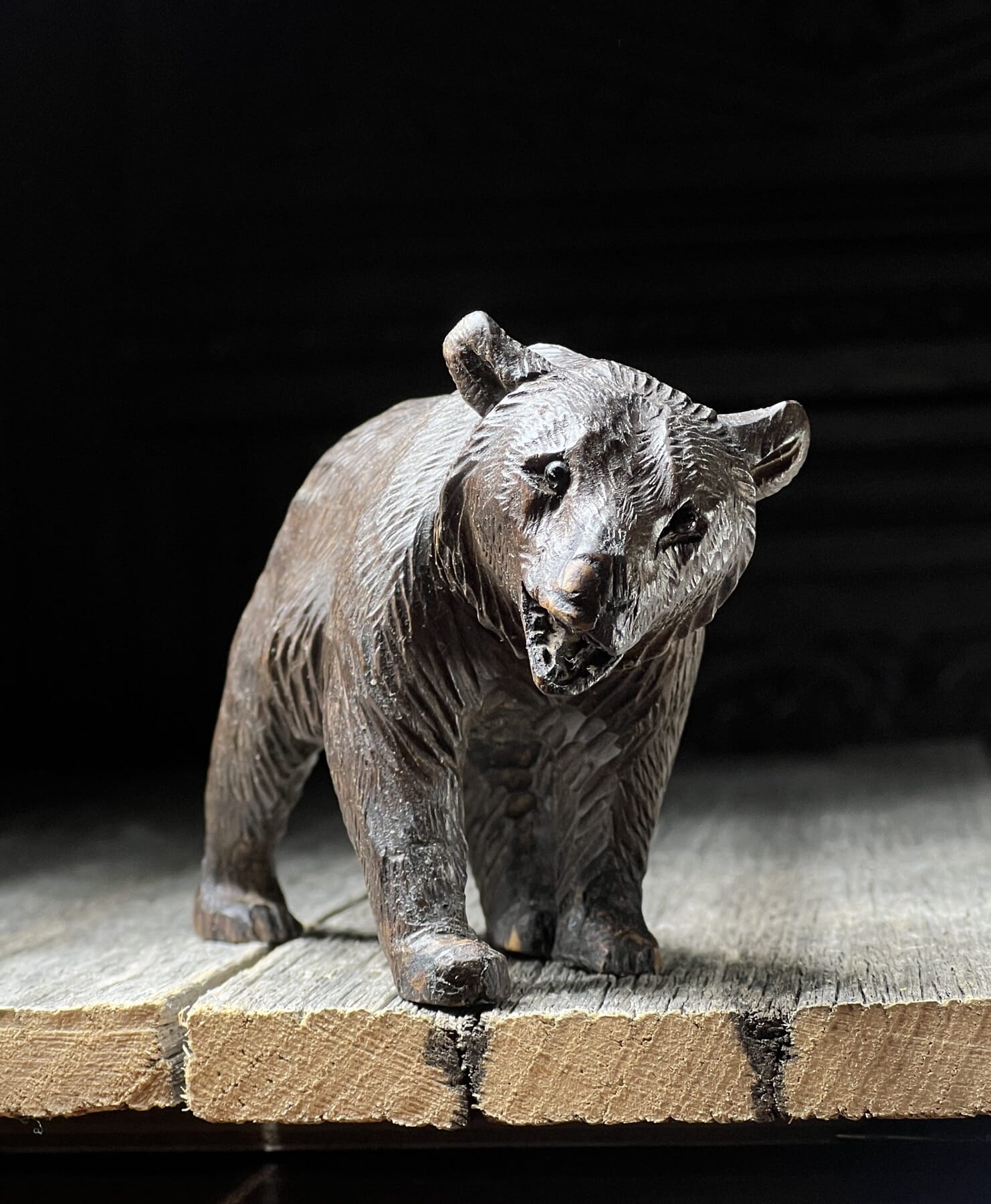 For Australia & New Zealand, it’s Fathers Day on the 4th September.
Time to find something unique for the ‘Father Bear‘!

We have a huge number of potential presents – to make things a little easier, here’s a selection of pieces he may like, chosen by our expert present-giver….

Ancient Objects are always popular with fathers, and we have a large selection of interesting items – from Indian Arrowheads to Chinese pottery Sheep, thousands of years old!

Really, really old! How about a Dinosaur Tooth? These are our oldest items – and also some of the cheapest!

Travel the world…. perfect for an office or study wall.

A pint or two…. these tankards are definitely on-theme, and some would even be usable! We’d advise the ceramic examples only as ‘usable’, as the older pewter examples do contain a certain amount of lead…

Just after an extra little something? Here’s a selection ‘under $100’. We can also help with extra-low postage, send us a message before you pay, and let us be exact on the cost.

See all under $100>>
Category: Uncategorized