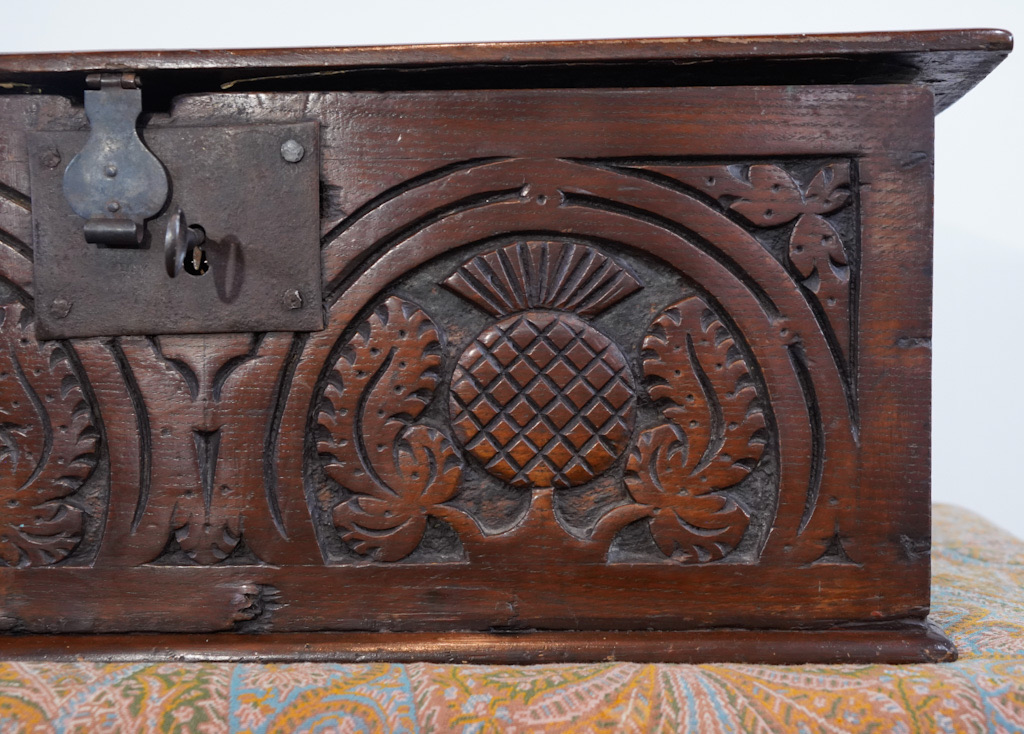 Amongst the early English Oak in this week’s ‘Premium’ furniture release are some ‘Bible Boxes’. These are simple products, the side planks merely overlapping and secured with a peg or nail- no fancy dovetail joins. As their name suggests, they were the perfect place to keep your large leather-clad Bible safe from being destroyed by rodents…. but also useful for anything else that might need storing, being kept safe by a basic lock & key from larger pests!

They acted as a bit of a hold-all, a way of instantly cleaning up by opening the flap & stashing items out of sight.

You could use them for your leather gloves, the linen & lace, deeds & letters – written on animal-skin velum – the every-day clutter of life, and all very tasty to rodents….

If we were to bring the concept into the modern age, the every-day life clutter I struggle with would be: iphone, ipad, various chargers for devices, gadgets, the manuals for the gadgets… the 21st clutter of life which always looks unsightly on display. We have a 17th century solution to a 21st century problem!

One particularly nice example just in is the Walnut one with Scotch thistle carving….. in itself an unusual design which must have had a significance to the original owner (usual designs are scrolls, diamonds, or foliage). Inside is a visual delight with a historical twist.

The interiors were lined with woodblock printed paper sheets in the 17th century, as shown by extremely rare survivors. This would have become worn and tatty, and been refreshed, which is what has happened to our example – but the paper used is most fascinating, and allows us to date this refreshing to the mid 1830’s – most probably 1832!

The sides have a series of colourful wallpaper scraps pasted on – remarkable patterns which are probably rare survivors of the period, late Georgian designs. In the base is the fascinating piece of English history – a poster printed for the ‘TAUNTON Reform Festival’ , THE GRAND PUBLIC ENTERTAINMENT TO BE GIVEN AT TAUNTON on WEDNESDAY the 18th JULY 1832′.

What follows is the ‘Order of Procession’ , grouped by their trades – and what a fascinating list of long forgotten skills it is.

I’m not sure what a ‘Throwster’ was – and the ‘Whitesmith’ had me puzzled, but being combined with the Tinmen gave the answer – a Whitesmith worked with metals and a file, finishing off items that other metalmen made… and assumably was usually covered in a fine layer of his whitish filings…

Taunton was a mill town, full of wool & silk mills. The Reform Society was a ‘grass roots’ organisation of the working classes, hence the pride in their trades demonstrated in this document. They sought for a chance of better treatment from the Government of the time, asking for such things as regulated working hours and welfare for those in need. Through peaceful rallies and organised marches such as the one outlined to take place here, they were able to show a strong and pressing voice for ‘Reform’ – and of course the occasional strike and riot helped as well. The year after this procession for example, the 1833 ‘Factory Act’ was passed – intended for the textile factories at first, this meant:

A small step towards a complete change in society, which soon led to such modern concepts as health & safety, and a gradual reduction in the use of child labour…. 60 years later, in 1891 the minimum age for working in a factory was raised to…. 11!
I’m going to keep this fact in store for next time my children complain about doing their household chores….

Isn’t it amazing the discussions a simple item like a ‘Bible Box’ can result in!