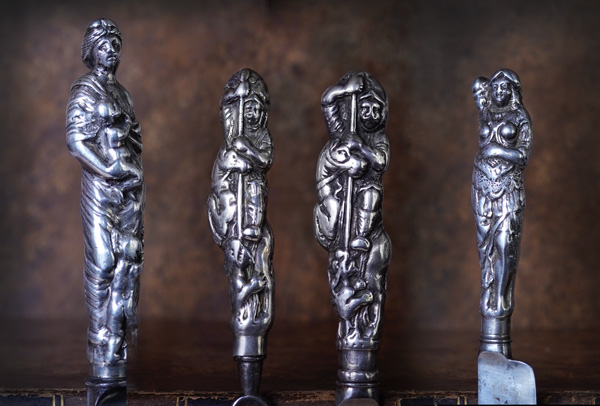 Rarely seen, these solid silver handles are sculptural works of art. They are Dutch, date to the mid-17th century, and have a fascinating lineage we can trace back to Renaissance Italy and the collections of the Dutch master Rembrandt himself.

“Fingers were made before Forks” is an old English saying often used to justify eating with one’s fingers. It’s also the truth – for most people. When you look at the art of the middle ages, you’ll often see the peasants in a Brugel tavern scene just shoving the food in.

The rich, however, had an advantage: knives. These expensive accessories were a luxury item, and allowed one to keep ones fingers unsoiled while eating…. simply chop it, then stab the morsel with the pointy end, and use this handy device to get it to your mouth. Revolutionary!
Even more luxurious and high-tech was the fork.

St. Peter Damian, an 11th century Benedictine monk, criticized a Byzantine-born Venetian princess for her extravagance :
“…such was the luxury of her habits … she deigned not to touch her food with her fingers, but would command her eunuchs to cut it up into small pieces, which she would impale on a certain golden instrument with two prongs and thus carry to her mouth.”
Shocking indeed!

A fork, when used with a knife, allowed a rhythm to eating, with both hands occupied – very civilised indeed, but only for those with the means. It wasn’t until the 18th and 19th centuries, and the age of mass production, that cutlery as we know it becomes an everyday item for all society.

Dating to the ‘privilege period’ is the collection of solid-silver handled cutlery pieces we recently discovered in a Melbourne collection. Examine the photos – when no blade is visible, they are nothing short of sculpture. Small-scale 360-degree sculptures in the Baroque manner, and obviously intended to impress. There were perfectly functional cutlery shapes, also in luxurious materials such as ivory available at the same time- but to have your knife and fork with St George slaying the Dragon on it was a whole other level…..

Their design is ancient looking, medieval or Middle Ages. The figure of ‘Charity’ could well be a Roman goddess from 2,000 years ago! So where does their design originate?

Unsurprisingly, there’s a link to the Classical world, as the Italian Renaissance artists drew much inspiration from the classical past that surrounded them. Of note here is Francesco de’Rossi, il Salviati (1510-1563), an Italian artist of great merit. His designs for luxury goods are well known due to original sketches being treasured and replicated extensively, engraved and copied and used as inspiration by artisans ever since.

The Dutch connection comes through the fascination the Low Countries had with the Classical past. Italy was a destination for anyone seeking Culture, and back in Holland, designs seen abroad were appreciated and incorporated. Artists often did the ‘Grand Tour’, and collections contained drawings and paintings of the results. Over time, these were assimilated by artists back in Holland, even if they never went to Italy themselves…..
One such artist was Rembrandt – and amongst his drawings are a remarkable series of Designs for Knife Handles. When we consider where & when he operated, we have an intriguing link to the Dutch great master – he had seen such handles, and owned some Salviati sketches of them, and created his own studies in pen & wash. This shows the great interest in these luxurious Baroque pieces from Italy – and naturally the Dutch craftsmen were able to create something to satisfy this curiosity, in the form of Ivory and Silver handles.

The series of handles we have at Moorabool are complete with their original fittings – three with knife blades and one with a fork. These are very helpful in dating the pieces.
First, the fork is the early 2-prong form. This appears in the earliest examples of the 15th century, and disappears in the early 18th century.

The shape of the knife is quite distinctive, having a straight blade and a tip with a sudden taper at the end. While this is a very early Continental form, appearing in Italian pieces from the 15th century, it also appears in Dutch examples of the 17th century, before other styles take hold.

These rarities are the feature pieces of our current collection of mostly English cutlery, beginning in the 17th century and continuing into the 18th and 19th. But none have the flamboyance of these silver handles…. imagine the interesting person they must have belonged to!