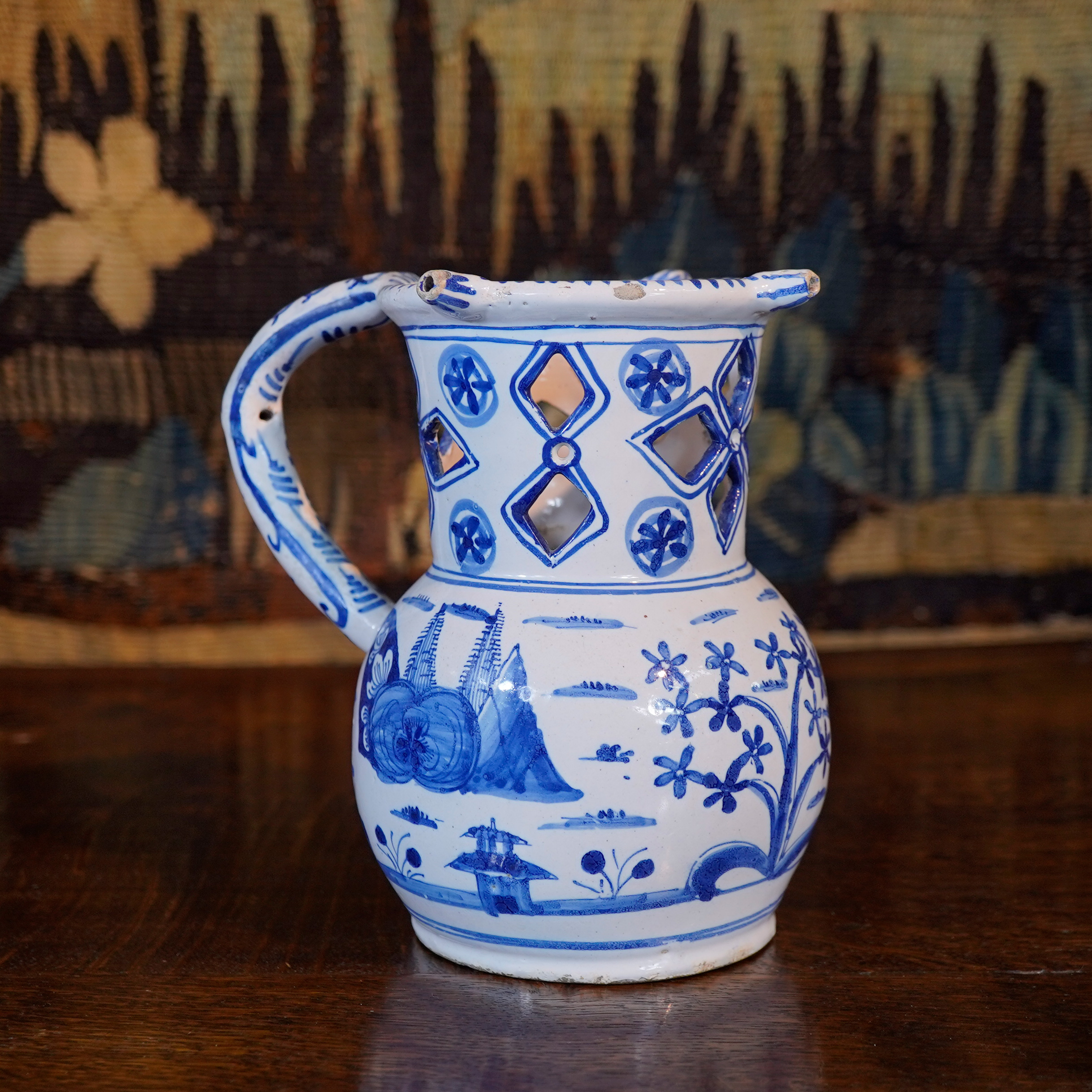 They are both tinglaze- but did you know there is a difference between ‘Delft’ and ‘delft’…. ?

The blue & white decorated pottery with tinglaze surface is a familiar sight in the Antiques world, instantly recognisable as ‘Delft’. This name comes from the city in Holland where vast quantities were made and exported from the 17th century.

One of the export markets was England. The fashion in England for the blue & white had been well established by the importing of Chinese porcelains, and this is obvious when you look at the styles produced; some are direct copies of Chinese patterns.

But England of course already had a long history of pottery manufacturing, with ample clay to make their own. While the imported Dutch Delft was a less expensive option to imported Chinese Porcelain, it was only natural that the enterprising English potters imitated the Dutch, and produced their own tin-glazed pottery.

Attribution is difficult at times – we find a number of manufacturers which are virtually impossible to separate – the esteemed Victoria & Albert Museum in London itself constantly describes pieces as ‘London or Bristol’….. We can’t just go by the decoration, as movement of artists to different firms is well documented – including to & from from Holland. The body can be a help – although once again, there is much trade in clays both in England and even across the channel! At times, an attribution can only be made to a country: English or Dutch? And this leads to a problem, with the name ‘Delft’ describing a pottery type, not an origin. The main division needed is the Dutch from the English, and so a subtle method has been devised:

We us ‘Delft’ with a capital D for Dutch –
and ‘delft’ in lowercase for English products!

Of course England not only imported Dutch Delft – they imported their new King & Queen with the regents William & Mary (1689-1702). These Dutch monarchs brought with them close connections with Holland, and it is no coincidence that the English delft productions start appearing in volume in this late 17th century period. This was a time of great prosperity for the English, and while the Continent had Holland to supply their tin-glaze needs, the English delft works were kept very busy supplying local needs – and found a ready market in the distant American colonies. London was an early producer, followed by Bristol, Liverpool, Belfast and Glasgow. All of these were trading ports eager for the overseas market, and English delft is often found in American archaeological sites of the period. It was written at the time that in Liverpool, ‘every merchant was concerned in a pot house made of delf’.

Delftware found a perfect niche market in the lower-middle strata of society of the time; while Chinese porcelain was superior, it was also expensive. Local porcelain had not yet commenced, and while the Germans and French were producing porcelain from the early 18th century, it was only for those of ‘great means’ – out of reach for most people. Delft had the same look for a fraction the price. The age of English delft lasts from the late-17th century until the mid-18th, when a combination of local porcelain production (Bow, Chelsea, Worcester….) and over the next few decades, the increasing volume/decreasing price of imported Chinese porcelain reduces the demand for the cheaper local products, and all manufacturers quickly disappear by the start of the 19th century.

Moorabool has some superb pieces of delft – and Delft – in stock at the moment – as well as the other Continental equivalent products of Faience (France), Fayence (Germany) and Maiolica (Italy) – all basically the same soft earthenware body hidden beneath a thick glaze filled with white tin oxide… but they’re a good topic for another post!

These, plus more to come, were part of our Premium Fresh Stock in February 2020 >>

Our prices for USA are currently around 30% less than the $Aust. price used on this website....

We are still open online & can ship world-wide.  Email for a quote.... we keep shipping as low as possible.