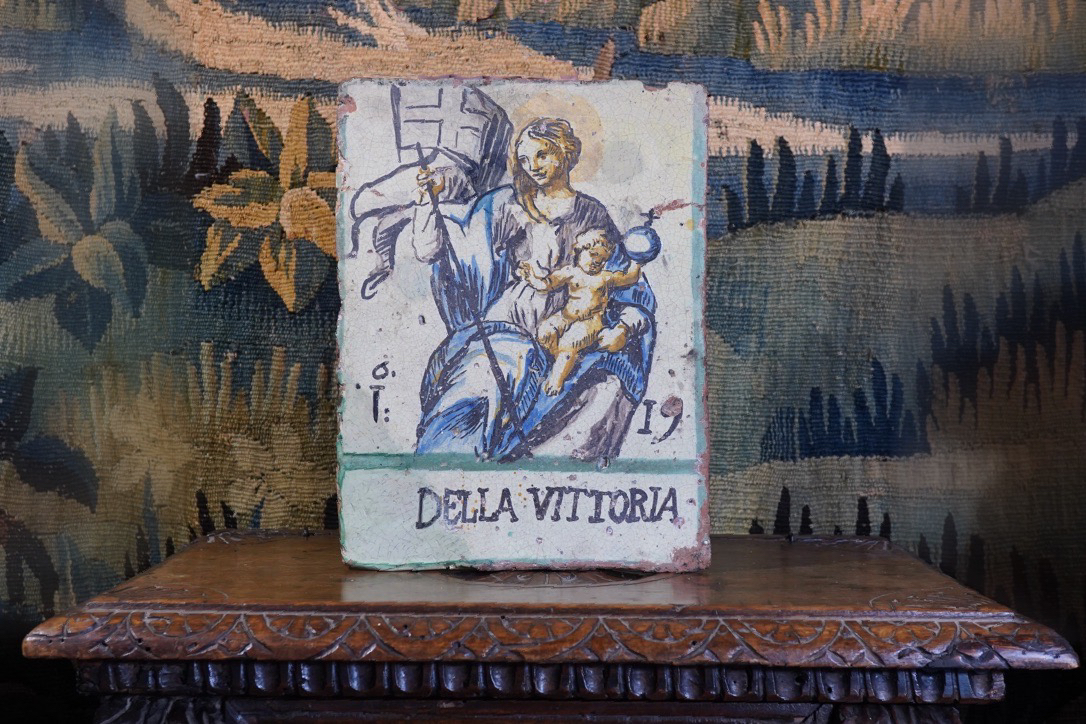 A fascinating fresh item at Moorabool is this tinglaze plaque – inscribed & dated ‘Della Vittoria / 1619’. It depicts a Madonna and Child, with her arm supporting a spear/staff from which flutters a banner with a cross.

These plaques are a common sight in the Mediterranean countries, in shrines on country roads and on building facades in the towns. Private houses have them inside their walls as a sort of ‘private chapel’.
Some where no doubt painted in oils, but the tinglaze pottery panels were the perfect medium for exterior display. They have lasted exposed to the elements for hundreds of years, the clay strong & well fired and the pigments unfading.

Their purpose was a simple dedication of faith. Roadside shrines generally appear at a place of spiritual significance for the locals, and a colourful plaque would act as a vivid reminder of that significance to all who passed. Some are public declarations of perceived miracles, a thank-you for the protection from some tragedy.

In Deruta, the city of potters, the various churches and chapels are full of these plaques, commissioned and dedicated by individuals who were keen to record their own miracles and faith;  there’s a builder falling from a building, a horse tipping upside down and throwing his rider, and updated versions incorporating cars crashing!

A unique ceiling filled with tile panels can be seen in the Church of San Donato, Castelli, with a vast variety beginning with many dated examples in the early 17th century. It is in this context our example was made; being dated is a great start, but where was it made – and why?

This title is interesting: ‘Della Vittoria’ translates as ‘Our Lady of Victories’, a title given to the Madonna in the context of a military victory. This image of Mary militarised is quite a rarity – she’s usually shown very differently, a merciful mother rather than a militant one.

Interestingly, ‘Madonna della Vittoria’ is the title of a fabulous work by Andrea Mantegna, now in the Louvre. This was commissioned by Francesco II Gonzaga, the ruler of the city of Mantua and the leader of the Italian League’s resistance to Charles VIII of France’s incursion into Italy in the late 16th century. He had fought to a stand-still victory at the battle of Fornovo in July 1495; one year later, the newly commissioned painting by the court artist Mantegna was carried into the newly built Santa Maria della Vittoria, commemorating Mary’s help in the historic victory. It now hangs in the Louvre, having been souvenired by Napoleon during his domination of Italy in the late 18th century!

Following this train of thought, the plaque in question was perhaps another celebration of a victory; however, while 1619 is within the timeframe of the ’30 years war’, (1618-48) the first decade was a series of conflicts in Northern Europe, not relating to Italy. The plaque is therefore best described as a dedication or shrine image, rather than an example commemorating an event – the date 1619 being the year of dedication.

The inspiration for the unusual image is one of two things; either a creation of an unknown artist on the pottery workshop, direct from his imagination – or perhaps it is a copy of an elegant work depicting a militaristic Madonna which has not survived the tides of war that have swept over Europe ever since this plaque’s creation in 1619; rather ironic!