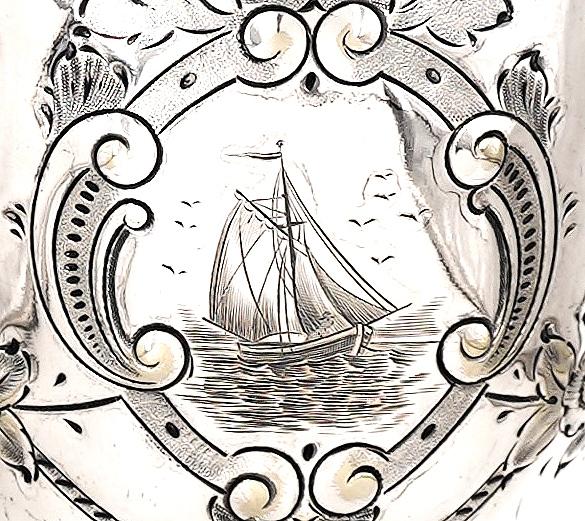 A Row about Rowing!

This group of silverplate trophies are an interesting insight into the origin of Australian’s obsession with Sporting Events, which were used as a means of bringing the newly established colonial communities together and giving them a sense of ‘Pride of Place’ that is still very active today.

The first (on the right, above) is an elaborate fine-quality piece of English electroplate, engraved with fruiting vine & with handles dripping with grapes – a curious choice for the prize for the 1879 Colac Regatta. Most probably, it was simply a case of what was available in the English imports at the Melbourne jewler’s shops.

1879 was the first year that the event was held on Lake Colac, the largest inland lake in Australia. It required quite an effort to organize, with boats being transported overland from Ballarat, Geelong, and even Warrnambool to compete. The freshly laid Colac – Geelong railway connection allowed the logistics of transporting them such a long distance.

There had been an earlier ‘regatta’ on Lake Colac on March 29th, 1879; the newspaper reports on it wax lyrical, describing a crown of 2,500 people from Geelong, Ballarat, Melbourne, and everywhere in-between all having a jolly good time: the Colac Herald reports on April 1st 1879 the “flags of all nations were blowing”, and the sight of all the boats & flags “…brought to the recollection of many the youthful remembrances of bygone years.” – in other words, the gathering was a time of bonding by the settlers over memories of the ‘Old Country’, a nostalgic celebration of what was commonplace in Europe, but a first on this far-away picturesque Australian lake in the Western District of Victoria.

“Old and Infancy; the youth and beauty of Colac and district were there, all eager to witness the interesting excitement of aquatic contests”….

“One or two slight mishaps occurred during the day which tended to amuse those present more than mar the proceedings, and were caused by the capsising (sic) of three boats…. “
One of these was the Maiden Sculling Race: ” only two started. At the start both men pulled away together, but the ripple of the water was too strong for the frail craft pulled by Parkinson, and the result was that he came to grief by the boat swamping when about half the distance had been pulled….. (he) swam to one of the posts and clung there until he was rescued by one of the boats of the Colac club.”

Fine entertainment indeed! And it was this ‘ripple of water’ caused by ‘a strong breeze blowing incessantly during the day (meant) the water was rather too much ruffled for the rowing contest….”

The success of this regatta showed the potential for a regular event to be held on the lake, and also the inappropriate nature of the windy season at the start of the year; and so the committee decided to schedule one for the same year. This second event has gone down in history as the official ‘First Regatta’, held on December 13th.

This event built on the experience of the first, and was a major event for the town. The Most Hon. George Augustus Constantine Phipps, Marquess of Normanby, GCB GCMG PC, in his role as the Governor of Victoria attended until the 8-oared race, after which the crowd cheered him to his special train which was to take him ‘back to town’ (Melbourne).
The Australasian covered the spectacle on December 20th, 1879:
“That an inland town so far removed from at least two of the principal boating centers should have attracted such numerous entries … speaks volumes for the exertions of the committee to provide first-class sport on their beautiful lake.”
The boats were again brought by train:
“Several first-class yachts were brought down by rail from the golden metropolis at considerable trouble and expense, while two eights (from Melbourne and Geelong) … made the eights the feature of the day”.

Our cup was a prize for this 8-oared race, and was awarded to the Banks Club as 2nd prize, this cup going to R.D.Booth, the no. 6 in the boat.

The ‘Banks’ club is a famous Melbourne rowing club, established very early, in 1866 on the ‘banks’ of the Yarra River in Melbourne – from where it still operates, producing many champion rowers for the present Australian sporting world. It is the ‘Banks’ club not because of the location, but due to the Bankers who were the founders: only Bankers were welcome to join, and the fees per annum were rather high – £1/1/ to join, then £2/2/ per year – a substantial amount in today’s money. But with secure bank-jobs, and the captain a manager, money wasn’t really a concern – unlike the working class Footscray crew, as we will explore later on in this article.

In 1879, Banks Club packed their 8-oared clinker outrigger boat onto a Colac-bound train, and took on the teams of the Corio Bay Club (Geelong), Civil Service Rowing Club (Melbourne), the Ballarat Rowing Club , and the Barwon Rowing Club (Geelong). The prize total for this 8-oared, “about 2 mile” race was £105 – with first price being a decent £80. However, as only 5 entries were received (they were hoping for 8) this was reduced to £60 for first, £20 second and £5 third.
The crew of 8 and their cox were all ‘weighed in’, with R. Booth being on oar no. 6, as recorded on our cup. They made their way out onto the lake towards a start position, all five crews trying to line up in a pesky breeze with limited success – and when the question came from the small steamer bearing the race official “….Are you all ready?”, several replied no – but the whistle was blown, and those not ready scrambled to catch up; Banks careered into Ballarat in the scramble, nearly fouling them, and the others gradually pulled away towards their goal. Like the Olympic commentators of today, the reporter described the flow of the teams as they pull up, then drop back…. “Ballarat seemed overmatched from the jump, and were in addition badly steered…. after the first half mile the Banks and Corio forged ahead gradually, Barwon having retired from the foremost position…”
Then it all came unstuck for Banks:

When about half the course had been traversed, No 7 of the Banks caught a crab, and this accident, together with the advantage already possessed by Corio, enabled the latter to secure a lead of about a length, which was maintained the remainder of the journey, and Corio were proclaimed the winners by about a length.”

More suitable prizes for the occasion are the other two cups. These are splendid English silver plate examples, the base with coiled rope, the support modelled as three oars lashed together with a ribbon. These are marked ‘Lee & Wigfull Sheffield’, a manufacturer who specialised in sporting trophies, but only formed in 1879: these were brand-new designs from a freshly-formed English company.
The cups are engraved with scrollwork framing panels to either side – one with a very nicely executed small sailboat. Once again, these were won by Booth as part of the eight oared race, and then the four oared – but this time on their home turf – in the Melbourne Regatta of 1881.

This event took place on the ‘Salt Water River’ – nowdays known as the Maribyrnong, flowing into the Yarra not far from its mouth. 7-8,000 spectators cheered them on, and The ‘Illustrated Australian News’ for 12th March 1881 carried the report along with an engraving of the winning moment for the Footscray crew, winning the Clarke Challenge Cup. This silver cup, valued at 100 guineas, was the most valuable race trophy in the world at the time, and is still held by the Footscray Club. It has two oarsmen perched on its shoulder, holding aloft their equipment on an angle – complimenting our trophies which would have sat alongside it, as prizes for the ‘Amateur’ races in 1881.

The Footscray crew dominated the race – as they had in their wins the previous 2 years – and this caused problems with the other teams, as these men were “…men who gained their living by manual labour”. This was seen as an unfair advantage, as the other teams didn’t, rather being ‘amateurs’ – ie most probably Clerks, or some other sort of desk-job. The issue raised was these ‘amateurs’ were unable to compete with “..those whose daily vocations are such that they may be said to be in training all year round.”! As a result, a definition of Amateur was arrived at, and applied to certain race classes,

Our trophies relate to the footnote at the bottom of this article, “The Banks Club won the Junior Fours and Eights in excellent style,…”. And on our smaller example, the committee has chosen to make a point about the amateur vs workman debate by inscribing

Robert D Booth was an interesting character who loved his rowing: he has been described as ‘one of the greatest oarsmen of his time’. He was a bank clerk with the Commercial Bank when he joined the Banks Club, during which time he won these three trophies. Soon after, he was a part of the Melbourne Club. He represented Victoria in the ‘Intercolonial’ events for may years, beginning with a win in 1878 against NSW . His list of placings is impressive, with barely a 2nd-place marring the list of first place prizes. In 1887, he was part of the crew who won the title for Victoria against NSW on Sydney harbour. An interview with the Sydney Morning Herald on May 30, 1887 gives us a fascinating insight into this true Australian sportsman:

The interstate rivalry is extremely clear in the rest of the article, a classic press-bashing that would not be out of place on the back page of today’s average paper….. Sport has not changed a bit beneath the surface!

Seen as an ‘entertainment’, these nautical Regatta events – along with horse races, athletic meets, and cycling, were in fact an important part of forming a sense of unity – through competition – amongst what was a large and diverse group of new arrivals to the region. The sense of pride conveyed in the various paper’s reports at the time show a healthy competition between the various regional cities, and between the States of Australia that certainly still flourishes. These trophies, as reminders of the origins of today’s rivalries, are important historical memories.