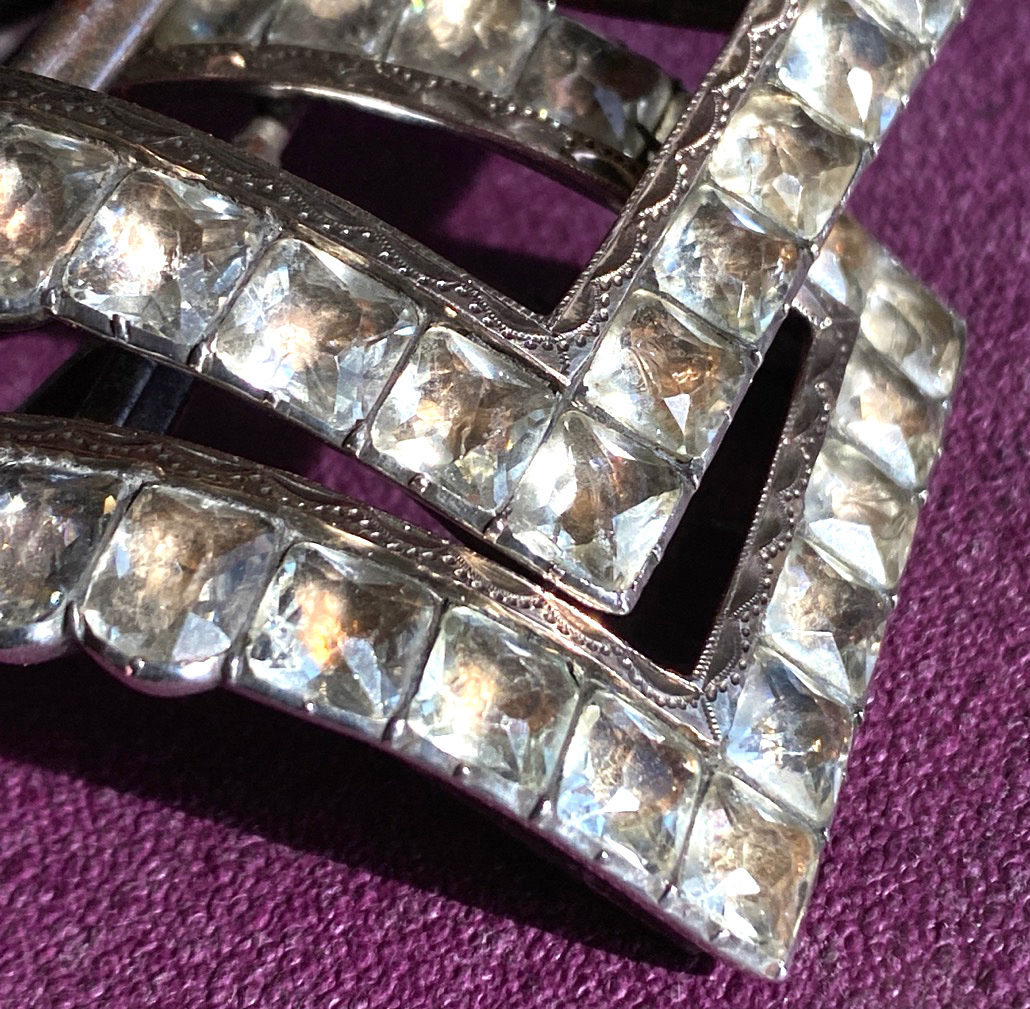 Some beautiful buckles have just arrived at Moorabool.

Shoe Buckles were a 17th century invention, before which shoes were tied in place. As the 18th century progressed, they developed into extravagant displays of wealth & status. At the end of the century, in France where the buckles of the Aristocracy were very large & bright, the Revolutionaries seized on them as a symbol of the Aristocracy, and one of their slogans to shout aloud was “Down with the Aristocrat Shoe Buckles”!

Fashion changed in the late Georgian period, and buckles on shoes decline in the early 19th century. The Victorians and Edwardians did re-visit the idea, reproducing the earlier styles but adapting to the modern shoe. But one area of shoe-wearing kept the tradition going strong – the Court of Law. This archaic dress code, with the wig, robe, and shoes of antique design meant a small number of firms in England were still producing such pieces into the 20th century.

At Moorabool, we have a choice for you – Scottish, Dandy, or Judge!
(Or could there be a Scottish Dandy Judge out there somewhere, for whom we have one for every occasion….)

The first is this magnificent pair of Scottish Sterling silver buckles. They are solid, cast into a mould and then hand-tooled with Scotch Thistles. Little surprise to learn they were made in Edinburgh, although their date of 1919 is surprising – they are an example of ‘historical’ pieces, made by the Edwardians in a much older style.

The second pair are simply ‘Splendid’, and well worthy of a modern day Dandy. They’re large, suitable for a man’s shoe. Ladies buckles were similar, but smaller. In the Georgian era, men really knew how to dress – silks and satins, cane in hand and stylish shoes with bold buttons was the ‘in’ look. The Macaroni, a mocking term for such dandies which soon became their label, would seek to out-do each other with the ‘Bling’, and shoes were an important part of the costume.
This bold style, with large sparkly stones packed together, are known as ‘Artois’ buckles, named after the brother of the French King Louis XIV. The Comte d’Artois had come to Britain as ambassador at the time, and would have been seen in all the in-circles amongst the gentry; it’s no coincidence the French fashions he brought with him were mirrored by the English.
The Royal buckles would have been a feast of diamonds; these examples are glass ‘paste’. While the Victorians knocked out endless imitation ‘costume jewelry’ pieces in paste, when it was first developed and marketed in the Georgian era it was regarded as a luxury man-made stone, advertised by the jewelers alongside their diamonds.

The same applies to the ‘gild’ that appears along the edges; this is ‘Pinchbeck’, an alloy that appears as bright as gold, but is in fact an alloy of copper and zinc. Christopher Pinchbeck, a London watchmaker, had invented the metal in the earlier 18th century. Its inclusion in buckles would have lowered the cost of the item – but also afforded more strength and durability than the 18-carat gold that was used at the time. Once again, the Victorians used the technique as a way of making ‘cheap ripoffs’ look expensive – but in the Georgian era, Pinchbeck was a luxury material.
‘Lux’ is a great word to describe these beautiful Dandy buckles.

The final pair are the serious ones…. these date to around 1910, and are definitely out of date fashion-wise – but are absolutely necessary in the world of Law. This set includes the shoe buckles alongside the smaller side-buckles for your ‘breeches’ . They are in the Georgian cut-steel style, and would have been a part of the costume of a Judge or Magistrate, alongside the required wig & robes. The box has the makers name – Ede & Ravenscroft – which indicates they must have belonged to someone very important, as this firm is regarded as the ‘best of the best’.

Ede & Ravenscroft are regarded as the Oldest Tailors in the world, having gained the Royal Warrant from William & Mary in 1689, then maintaining it by making the Royal Robes of Office for every British Monarch since.

They have always been the most desirable robe/wig/hat maker for those needing traditional formalised outfits. Their address at 93 Chancery Lane, which they still inhabit, is very convenient to the Inns of Court and the English legal system – their main clients.  As an English newspaper put it, “….one of the oldest tailoring firms in the world, still family-owned and still enrobing the nation’s bigwigs, literally.”

You’ll find a few more on our website, too – including some very inexpensive Victorian & later Buckles >>