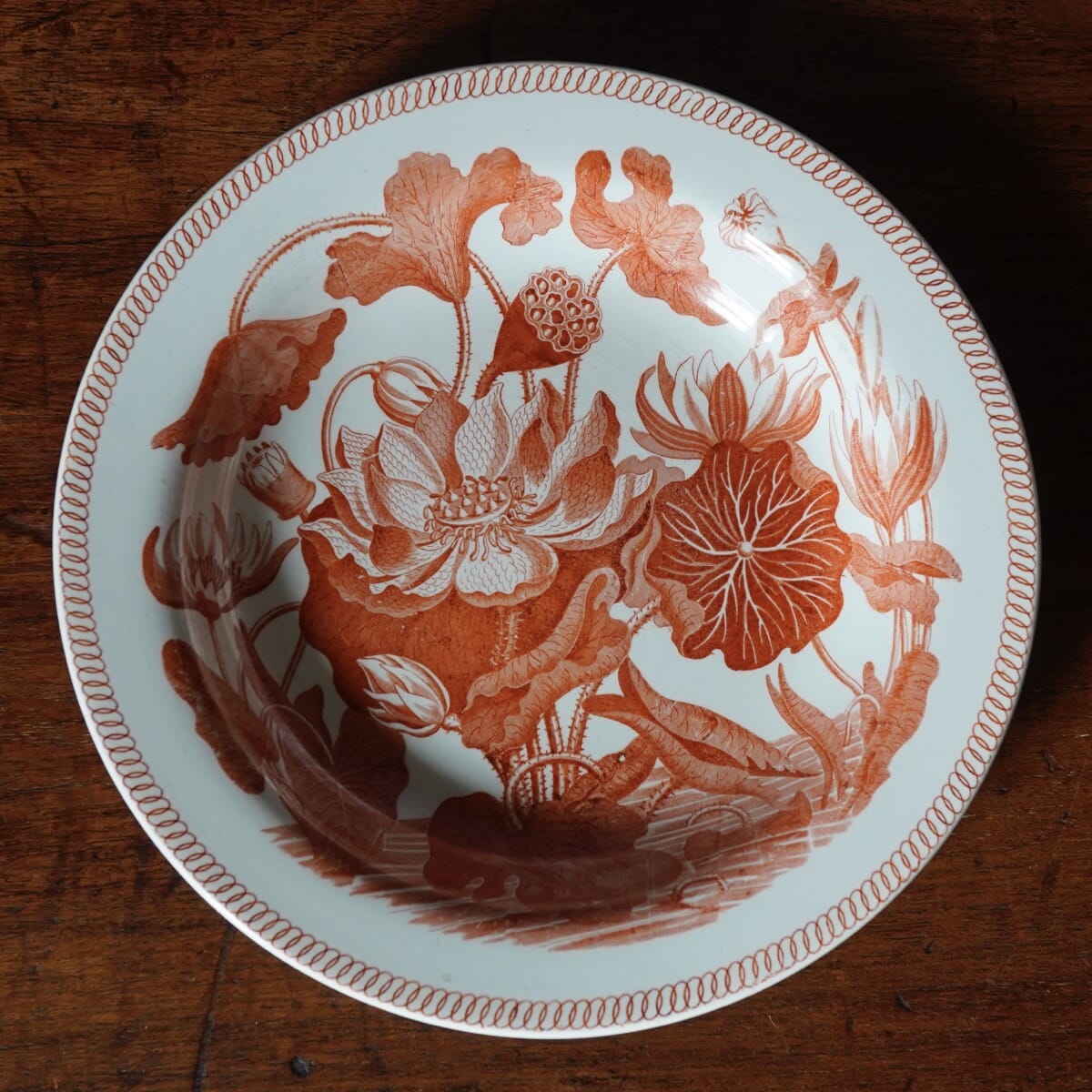 Commonly called ‘Darwin’s Water Lilly’ , or just ‘Darwin’, it is one of the few Wedgwood printed patterns of the first decade of the 19th century that was not Oriental in inspiration, and in fact an original creation.

The inspiration for the design was pulled from several different engravings in Botanical magazines of 1803-6, and shows specimens of three types of the ‘Nymphaeaceae’ family, commonly called ‘water lily’
– left to right they are:
1 -‘nymphaea stellata’, or starry water lily,
2 -‘nelumbium speciosum’, or sacred Lotus of India,
3 -‘nymphaea lotus’, or Lotus of Egypt.

The original version designed in 1806 was printed in brown as a basis for enamel decoration; this is said to be the earliest instance of printing in brown that can be accurately dated.

The difference between this earliest example and those slightly later is very subtle; a half-submerged leaf at 5 o’clock is the best indicator, not appearing in the 1807 version, but there by the circa 1815 examples.

Onglaze red was used from late 1809. In 1811 blue was introduced and become a favourite. Underglaze red appears in 1828. A later 19th century version was named ‘Old Water Lily’.

But why is it so often called the ‘Darwin’ pattern?
It turns out it’s a family affair. In the British Museum is a plate, very similar to our brown printed example, and another is in the Victoria & Albert, both from the same source: the family of Charles Darwin. In older literature, there is a story about them being from a service made by Josiah I Wedgwood for his friend Dr. Erasmus Darwin, on occasion of his marriage in 1781. However, this date is far too early for the pieces we are examining. The present conclusion is it was designed by John Wedgwood – the eldest son of Josiah Wedgwood, a noted horticulturist who was co-founder of the Royal Horticultural Society, Kew.

It was ordered in 1807 by Dr. Robert Darwin, son of Erasmus  Darwin, and father of the famous Charles Darwin. He received it in 1808.

The Darwin family and the Wedgwood family were intimately linked. Josiah Wedgwood and Erasmus Darwin were both part of the ‘Lunar Society’, the incredibly forward-thinking group of scientists and engineers that regularly met to discuss the exciting new world of science & technology – and botany – that was emerging in the late 18th/ early 19th century. A friendship was obviously formed, and several generations of inter-marriages followed. Erasmus’s son Robert married Josiah’s daughter Susannah, and their son, Charles Darwin, married his cousin – Emma Wedgwood, daughter of the second Josiah Wedgwood and his wife Elizabeth. She was therefore the daughter of his mother’s brother, and genetic problems are obvious in the generations that followed… Much has been written about the irony of Darwin’s fascination with aspects of genetics and evolution in nature – including how in-breeding caused a species to be fragile – and he himself wrote of his genetic concern for his own family….

Analysing the image source reveals the draftsman who created the ‘Water Lily’ design used multiple images, combined. Four source botanical images have been identified in the literature, one of which is a double – the following diagram shows which part comes from which publication. (Slide the divide for the arrows. )

The use of five different prints, from two of the botanical journals of the time, shows the designer was well aware of ‘botanical correctness’. They keep the leaf type of all three specimens separated and correct, and by combining the two prints of the Nymphaea lotus – no. 3 below – they show their scientific interest in the accurate description of species the botanists were striving for. The suggestion that it was John Wedgwood, co-founder of the Royal Horticultural Society (along with Sir Joseph Banks) makes perfect sense.

In the Wedgwood archives, a letter written to John’s brother Josiah Wedgwood II by the manager Thomas Byerley, states:

‘Your brother is extremely active and intelligent, and is fast paving the way for a radical form, and will greatly benefit the concern ’.

Unfortunately, John retired from the firm in 1812, leaving just a handful of fascinating precise botanical statements as his ceramic legacy.

We’re pleased to have a selection from the earliest products of Wedgwood in this mesmerising pattern – a chamberpot and dish in the blue of the 1820’s, three red plates from around 1820, and an example of the earliest short-lived brown print.
The final piece is a 20th century Wedgwood re-creation, limited edition for the Wedgwood Collectors…… enjoy!