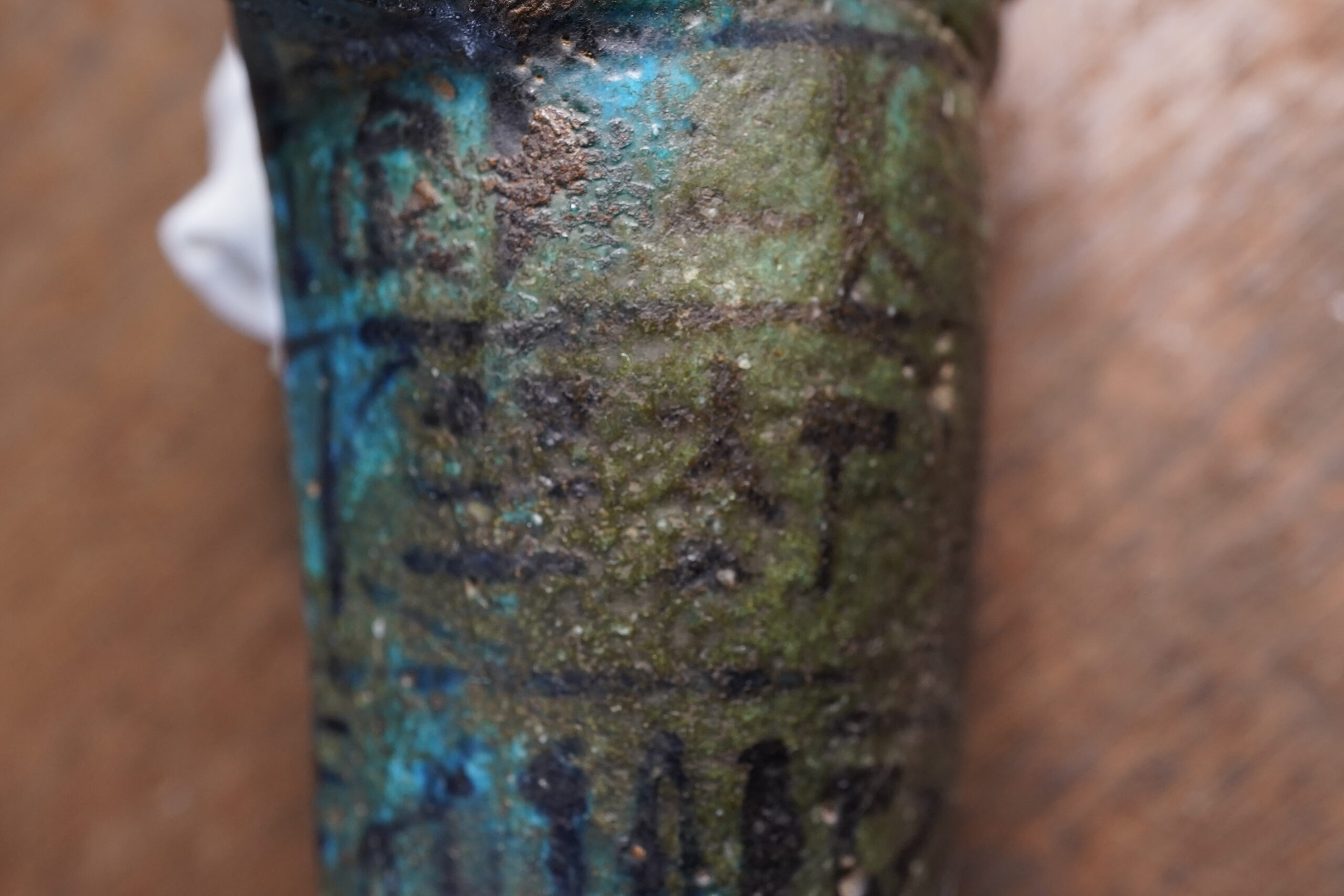 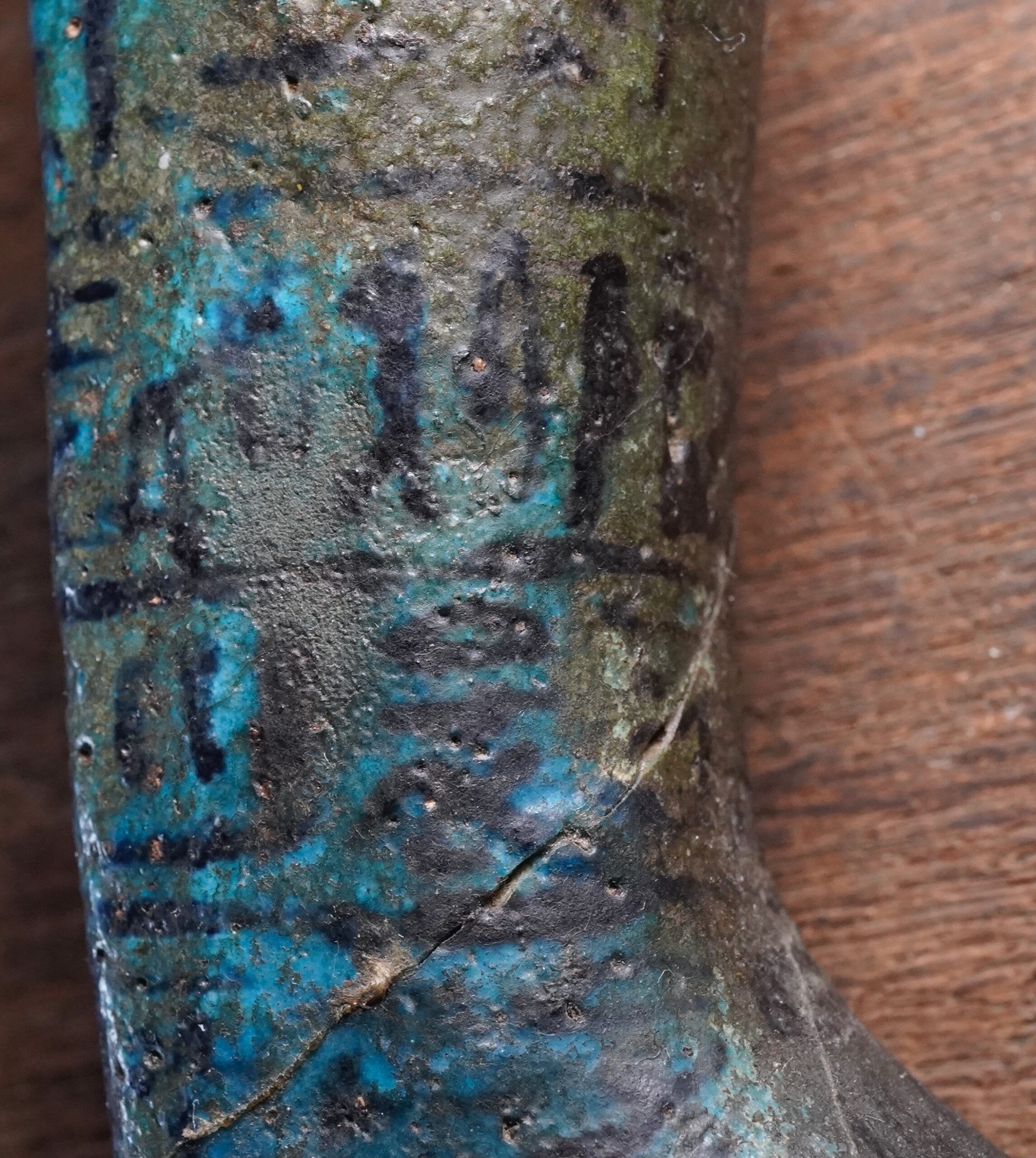 Important Egyptian Royal Shabti figure, bearing the Royal Cartouche twice with the name ‘Henttawy’, Divine Adoratrice of Thebes, the faience mummiform figure depicted with pick & hoe in crossed-over hands, a seed-bag painted in dark Tinglaze pigment to the back, the front with lengthy hieroglyphic inscription, with facial details & wig picked out in dark pigment.

Condition: colour has mis-fired over front panels, with vivid blue more on the back (original manufacturing fault), front left corner with fill to chip, top left of head with section of old white fill.
Excellent display condition, loosely mounted on a modern stand.

Provenance: Henttawy shabtis appeared on the market in Egypt in the mid-19th century; this example from an old Melbourne, Australia, collection, purchased latter 20th century by the Rothschild Collection, probably in Melbourne, sold again 2021 Melbourne thence to Moorabool Antiques, Geelong.

She is only known by her shabtis, which appeared on the market in Egypt around 1845. They are assumed to have been found in the ‘Ramesseum’, ht mortuary temple complex of Ramses II at Thebes, the traditional burial place of Theban Divine Adoratrices.

The ‘Divine Adoratrice’ was a prestigious title initially given to royal women in order to facilitate the transfer of power from one pharaoh to the next.

During the 21st Dynasty, Egypt in effect had two rulers; lower Egypt was ruled by a Pharaoh from Tanis, hence known as ‘Tanite’. Middle & Upper Egypt was under the control of the High Priest of Amun in Thebes, ruler in all respects except the title ‘Pharaoh’.

During the days of this Theban theocracy, the office of ‘Divine Adoratrice’ ensured the dynastic succession of the High Priest of Amun. As a High Priestess and earthly spouse of the god Amun, the Divine Adoratrice also ruled over the extensive temple duties and domains, controlling an important part of the ancient Egyptian economy.

As she is one of many ‘Henttawy’ identities known from inscriptions, she is known as ‘Henttawy-D’.

Her father was Pinedjem II, High Priest of Amun, her mother was Isetemkheb D, ‘Singer of Amun’. Both her parents were children of the high priest Menkheperre who was brother to Maatkare Mutemhat, the God’s Wife preceding Henuttawy.

“Illuminate the Osiris, the divine adoratrice Henuttawy. She says: O you shabti!

If the Osiris, the divine adoratress Henuttawy, true of voice, should be assigned or conscripted to do any work

that needs to be done there in the necropolis, once obstacles have been removed there to do (work),

or if (she) should be consigned at any time to cultivate fields, to irrigate riverbanks,

or to transport sand of the West to the East and vice-versa ‘Here I am!’ I shall say ”

My Account
Information
0
Brought to you by WisdmLabs: Expert WooCommerce Developer

Add up to 25 items here, and save or share them via a link.
Return to shop