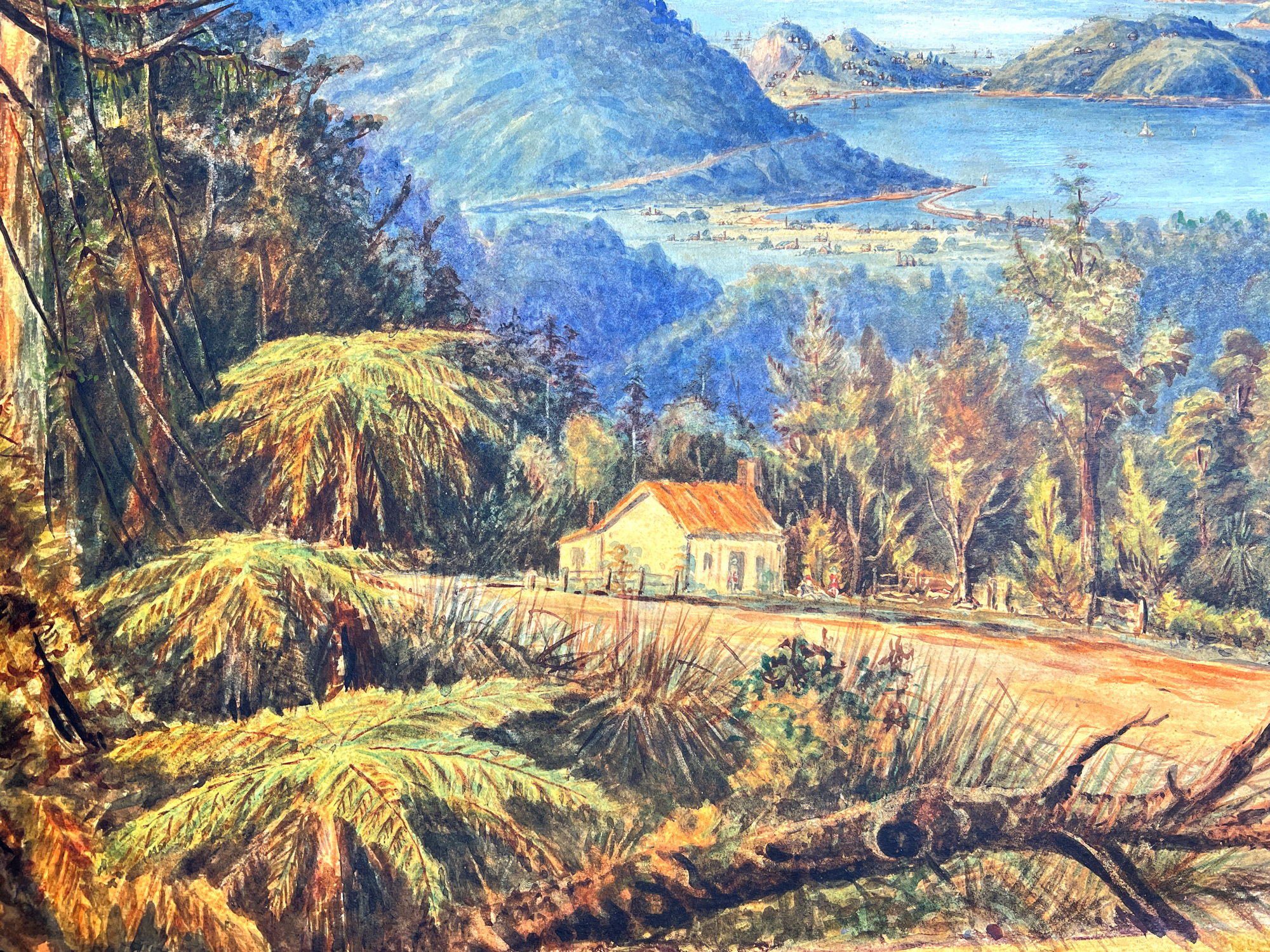 Provenance: from the wall of ‘Grant’s Albion Hotel’, Casterton, in situ when current owner purchased the premises in 1982 & according to tradition, there since ‘new’.

Arthur Ernest Chapman:
Born in Wellington in 1847, his father was a judge. He was taught painting by C.D. Barraud, a notable New Zealand landscape artist of the mid-1850’s (see more on him below), and married his daughter Florence. By 1865 he was in Dunedin, working in a bank, and then on his father’s large Otago station. This experience allowed him to head over to Australia, where he spent some time managing a station there. By 1881, he was back in NZ, and when his father died, as oldest of the siblings he would have expected to have inherited the property. He was certainly managing it, but his father’s will did not produce the expected results: in 1888 , he sold his share to his brothers, and headed over to Australia with his family. 1888 was the year of the ‘Melbourne Centennial Exhibition’ held in the Royal Exhibition Buildings in Carlton Gardens. In the documentation for the exhibition, his art teacher (& father-in-law) C.D. Barraud, is an ‘Honorary Commissioner’,  and Ernst Chapman is listed as the same, with his address given as ‘Melbourne’. He remained in Melbourne, teaching art. This work is datable to the period when he worked in a bank in Dunedin, circa 1865. The view can be identified, and features in the landscape changed after 1872. The exact point he painted it from and even part of the house in the foreground has been located – it’s presently 92 Mount Cargill Road, and he painted this view from opposite, up a steep hill. The forrest is long gone, and the settlement of Sawyer’s Bay is transformed by land reclamation – but the distant Port Chalmers is still similar, and the dramatic volcanic peaks that make up the distant shore all identifiable. It must have been one of his largest works, taking an entire full-size sheet of watercolour paper – and so something significant to him. Perhaps it was intended as a memory piece for when he settled in Australia, to remind him of his ‘homeland’ – this dramatic harbour being his point of departure. How it came to be in a pub in Casterton is unknown – probably purchased after Chapman’s death. With Chapman not being well documented, and no indication of the location of the scene evident, it was thought to be an Australian bush view…..