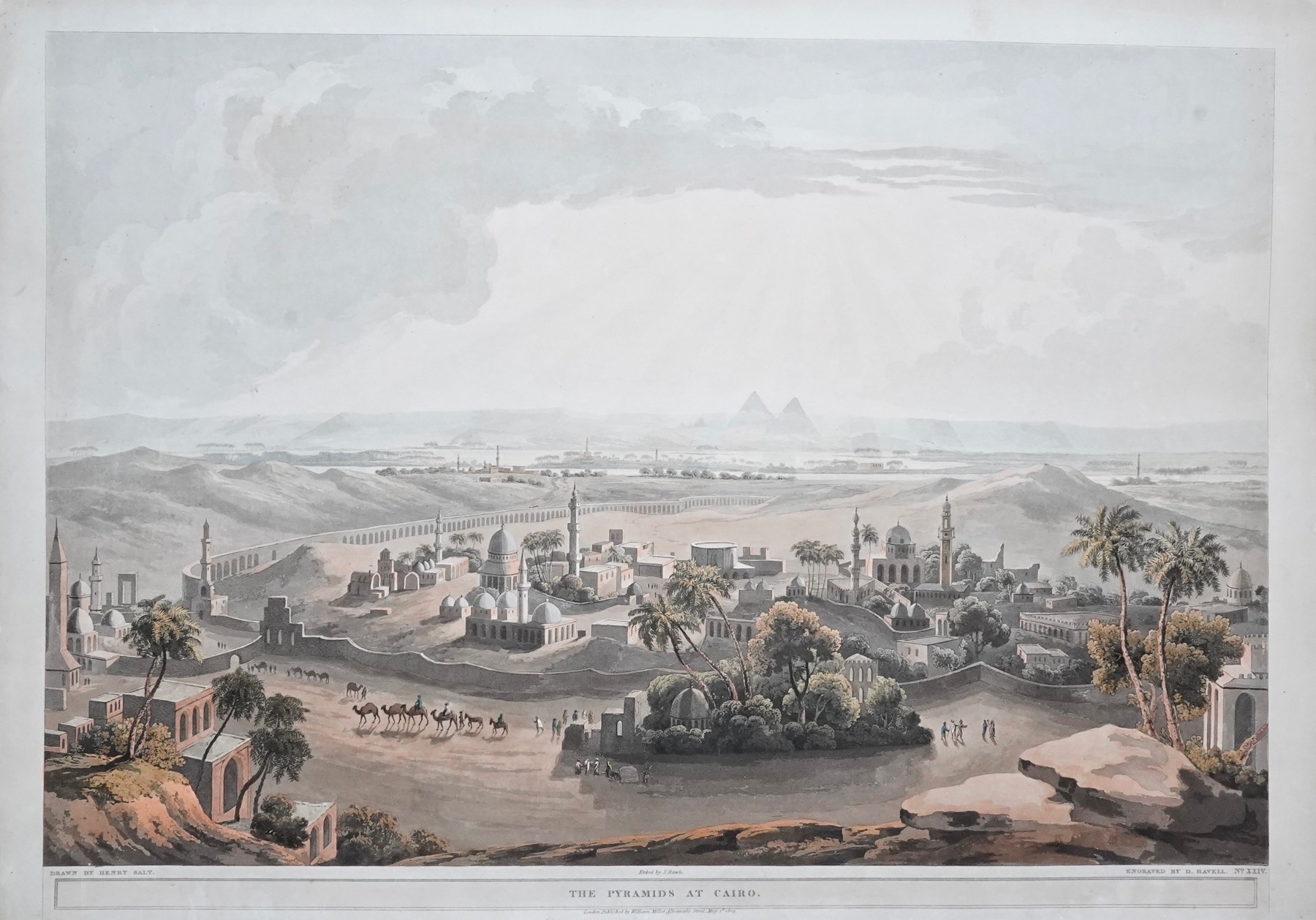 The Pyramids at Cairo,
Plate 24 from ‘Twenty-four Views in St. Helena, the Cape, India, Ceylon, the Red Sea, Abyssinia and Egypt’
Published by William Miller, London: May 1, 1809
Aquatint, etching, and engraving, printed in sepia tone, then finished in colour by hand.

Lettered below image with the title, plate number, and “Drawn by Henry Salt / Etched by S. Rawle / Engraved by D.Havell / London, Published by William Miller, Albemarle Street, May 1st 1809

Henry Salt was an important figure in the history of Egyptology, being responsible for kindling the British public interest in ancient Egypt by bringing a large number of artifacts back from Egypt for the fledgling British Museum.
Born in Lichfield in 1780, he originally trained as a portrait painter and went to London in 1797 to study under Joseph Farrington, RA, and subsequently to John Hoppner, RA.

These large aquatints were the results of his travels during 1802-1806, as secretary and draughtsman with George Annesley, Viscount Valentia. They embarked on a major tour of ‘The East’, visiting India, Ceylon, Abysinnia and Egypt. Salt’s drawing skills were utilised, being used as the basis for illustrations in his employer’s publication, ‘Voyages and Travels’. They were published in 1809 as an accompanying folio, titled “Twenty-four views taken in St Helena, the Cape, India, Ceylon, the Red Sea, Abyssinia & Egypt”. There were two views in Egypt, this one of the distant pyramids, and another depicting the view over the Grand Mosque.

Henry Salt went on to become British Consul-General in Egypt in 1815, where excavated extensively, procuring a large number of antiquities for The British Museum and for his own collection. He sent a large collection of antiquities to The British Museum in 1818. Many other pieces were sold to private collectors, the most notable of these being the sarcophagus of Sety I purchased by Sir John Soane and still to be seen in his house museum in London today.
He was elected a Fellow of the Royal Society, London, but spent most of his life in Egypt. He died at Desuke village, near Alexandria, 30th October 1827.