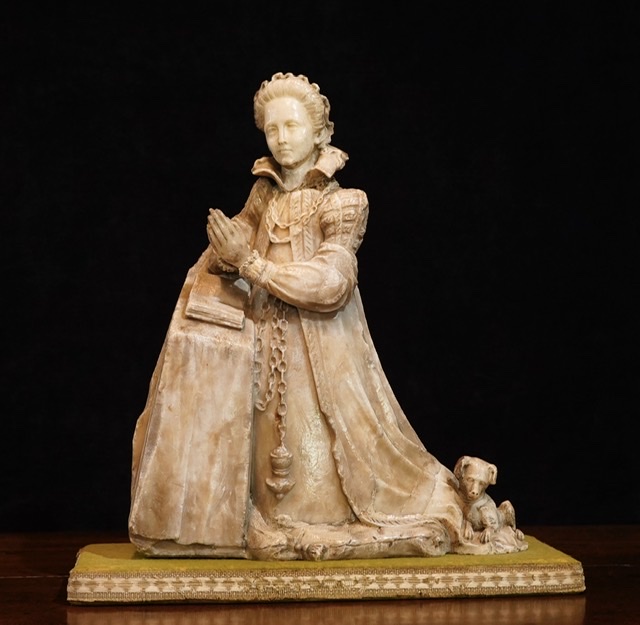 A serious piece of British History has surfaced in Australia…. or has it?

In our current Exhibition is a remarkable discovery: a ‘Nottingham Alabaster’ carved figure of a Lady at prayer, a small dog at her side. The costume is superbly detailed, and allows us to date it firmly within the Elizabethan period, mid-16th century. A colleague joked ‘it’s Mary, Queen of Scots – with her dog’ – and so, a chain of research was started, with a startling conclusion.

Mary, Queen of Scots was one of English history’s great tragedies. Imprisoned by her half sister, her story is full of intrigue and mystery until her beheadal in 1587.

A quick google of ‘Mary Queen of Scots Portrait Bust’ came up with multiple examples of her, mostly originating with the funerary image placed on her memorial in Westminster Abbey (by William and Cornelius Cure, 1606-16). Comparison with our example is remarkable -they depict the same face! We have the usual high-forehead that was fashionable in the Elizabethan era – and a squared temple, eyes at slightly varied level, long thin nose, and chin with central dimple. Even her mouth conforms nicely. It’s the Queen!

When we include the small dog off to one side, the idea that this is depicting Mary, Queen of Scots, suddenly becomes real. The tragic tale of her execution includes the discovery of her small Skye Terrier ‘lap dog’ beneath her dress, covered in blood and refusing to leave the Queen’s headless corpse…..

There is no known ‘devotional’ figure of this nature of the Queen known, although it is just the sort of thing she may have commissioned. We could go through her sad tale and find the time in which she would have been able to do such a commission, in the mid 16th century, for a private chapel in one of her residences, perhaps? And then, naturally we start thinking of where a piece this important should be now: the National Portrait Gallery , London springs to mind…..

But first, it’s a bit grubby and needs a clean: and suddenly, the statue of the Queen takes a completely different path….

As the layers of dirt are washed away, several areas of restoration become evident, masked by plaster; the plaster is what has stained dark. Once it is off…. we have three areas of great concern.

The reason these appear different is because they are a completly different stone – white, instead of honey-toned. They are added to the carving.

In a twist of fate, the Queen who so tragically lost her head… has found a body!
It becomes clear from the different stone used that what we are looking at is a Victorian ‘Restoration’, where a head, a cushion, and a dog have been added to an earlier sculpture. In other words, the very details that made it into a super-rare, unheard of sculpture of Mary Queen of Scots are actually all from the fertile imagination of a Victorian trickster. They created something that probably never existed!

We do wonder when it came to Australia: certainly a long time ago…. and so, it enters the list of ‘magnificent frauds’ that made their way to Australia, sold to some gullible wealthy squatter on a trip to London, probably back in the 19th or early 20th century. We have seen a lot of other examples – the fabulous ‘Sevres’ pieces we featured a few years back are exactly the same, partially original period pieces, but doctored up to make them impressive, rare, and saleable.

The origin of the head can be traced back to her memorial in Westminster Abbey. Her body was brought here by Charles I in 1612, and a magnificent marble construction with a depiction of the queen was created by the sculptors William and Cornelius Cure, 20 years after her execution and based on a small portrait miniature painted from life. This cast in turn inspired all the busts and statues of the Queen which appear in the Victorian era, when she became so popular – and when this well carved head was most likely to have been spliced onto a genuine Elizabethan relic….

Mary has been the subject of numerous films and books, and has quite a following on the web. One of the problems with the nature of information on the web is ‘anything goes’…. and in the case of Mary, we have misconception of the various plaster casts of her head as ‘death masks’. This is not the case, the plaster casts were all taken from the Cure creation, which was a re-construction from a miniature portrait of her painted from life.
Calling these busts ‘death-masks’ would be as accurate as calling this wonderful Victorian Fraud an Elizabethan Devotional Statue of Mary, Queen of Scots…. it’s not quite right.