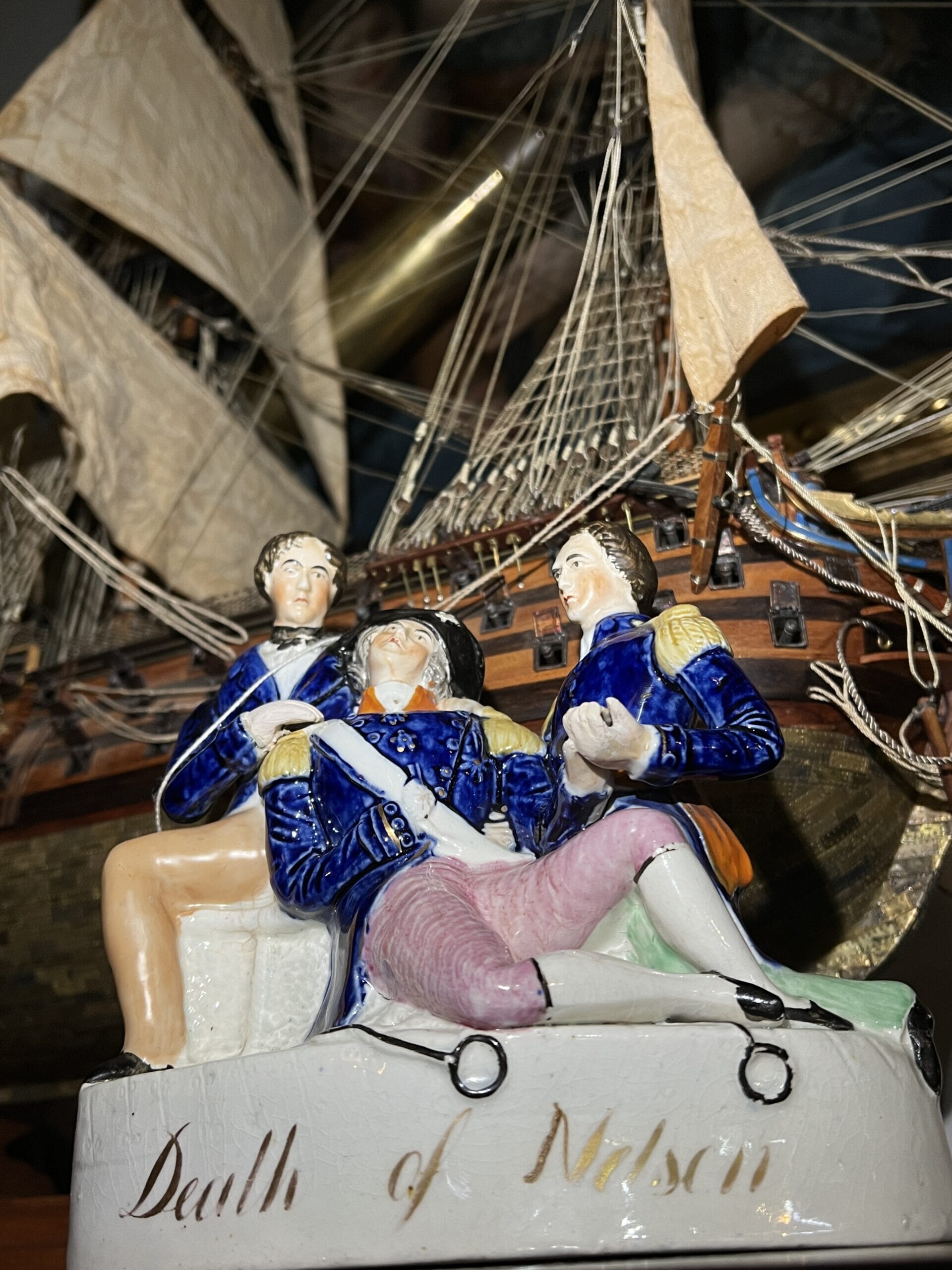 Trafalgar, 1805:
It was a tragedy of heroic proportions: the battle with the French was won, but the admiral responsible, Nelson, was dead. While the event happened in 1805, it still had the imagination of the public 40 years later, when the Staffordshire figure illustrated here was made to dramatically illustrate the event.

In the words of William Beatty, Surgeon on the Victory who published his account in 1807:

About fifteen minutes past one o’clock, which was in the heat of the engagement, he (Nelson) was walking the middle of the quarter-deck with Captain HARDY, and in the act of turning near the hatchway with his face towards the stern of the Victory, when the fatal ball was fired from the Enemy’s mizen-top; which, from the situation of the two ships (lying on board of each other), was brought just abaft, and rather below, the Victory’s main-yard, and of course not more than fifteen yards distant from that part of the deck where His LORDSHIP stood. The ball struck the epaulette on his left shoulder, and penetrated his chest. He fell with his face on the deck. Captain HARDY, who was on his right (the side furthest from the Enemy) and advanced some steps before His LORDSHIP, on turning round, saw the Serjeant Major (SECKER) of Marines with two Seamen raising him from the deck; where he had fallen on the same spot on which, a little before, his Secretary had breathed his last, with whose blood His LORDSHIP’s clothes were much soiled. Captain HARDY expressed a hope that he was not severely wounded; to which the gallant Chief replied: “They have done for me at last, HARDY.”—”I hope not,” answered Captain HARDY. “Yes,” replied His LORDSHIP; “my backbone is shot through.”……..

CAPTAIN HARDY ordered the Seamen to carry the Admiral to the cockpit; …. The Reverend Doctor SCOTT, who had been absent in another part of the cockpit administering lemonade to the wounded, now came instantly to His LORDSHIP ….. (Nelson said) “take care of my dear Lady HAMILTON, HARDY; take care of poor Lady HAMILTON. Kiss me, HARDY.” The Captain now knelt down, and kissed his cheek; when HIS LORDSHIP said, “Now I am satisfied. Thank GOD, I have done my duty.” Captain HARDY stood for a minute or two in silent contemplation: he then knelt down again, and kissed HIS LORDSHIP’S forehead. HIS LORDSHIP said: “Who is that?” The Captain answered: “It is HARDY;” to which HIS LORDSHIP replied, “GOD bless you, HARDY!” After this affecting scene Captain HARDY withdrew, and returned to the quarter-deck, having spent about eight minutes in this his last interview with his dying friend.

….The Surgeon again left him, and returned to the wounded who required his assistance; but was not absent five minutes before the Steward announced to him that “he believed HIS LORDSHIP had expired.” The Surgeon returned, and found that the report was but too well founded: HIS LORDSHIP had breathed his last, at thirty minutes past four o’clock; at which period Doctor SCOTT was in the act of rubbing HIS LORDSHIP’S breast, and Mr. BURKE supporting the bed under his shoulders.

AUTHENTIC NARRATIVE
OF THE DEATH OF
LORD NELSON:
WITH
THE CIRCUMSTANCES PRECEDING, ATTENDING, AND
SUBSEQUENT TO, THAT EVENT;
THE PROFESSIONAL REPORT
ON HIS LORDSHIP’S WOUND,
AND SEVERAL INTERESTING ANECDOTES .
BY WILLIAM BEATTY, M.D.

Nelson memorabilia was a big market throughout the earlier 19th century. This is no surprise when we consider the potential market: England had spent a long time struggling with France, and the soldiers & sailors who went through the experience in the early 19th century – in their teens or twenties – were in their ‘old-age’ years by the 1840’s when this figure was made – the perfect time to buy a figure with sentimental appeal for the mantel! And perhaps, as a present from the next generation, given to the Grandfather who would entertain with his stories of ‘… back when I was in the Navy….’ .

This group is rare: there are several different depictions, by different factories, with the three figures in the group. In Harding, vol. 1 p92, there are 5 variations illustrated; 4 are ‘E’ rarity, suggested at £3-400. This version, however, is ‘C’ rarity: £1,000 – £2,000.
The figures are well modelled, the painting well executed, and the most distinct point-of-difference is the pair of lanyards with rings attached, moulded & painted black front center.

The visible fingers of both officers have been restored in our example – although Nelson has somehow survived intact! Examining the illustrated example reveals a mistake the restorer made: the figure on the left should have a glass of water he is offering to Nelson, not included with the restoration.

This comparison with the example in Harding’s book also emphasizes the superior quality of our example – the detailing seems much crisper, which may simply mean it came out of a newly made mould, as opposed to the harding example, where the mould was well-used and details less distinct.

It’s a fine & desirable rarity, despite its flaws!

Who are his companions?

With the tale of his death as told above, we can identify the figures comforting Nelson. To his left is the gent who should have a glass in his hand; this would fit the part played by the Reverend Doctor Scott, who was ‘administering lemonade to the wounded’ and gave Nelson liquid when he requested it.
To his right is an officer, holding his hand; this would be Hardy; famously, towards the end, Nelson said ‘Kiss me, Hardy’.